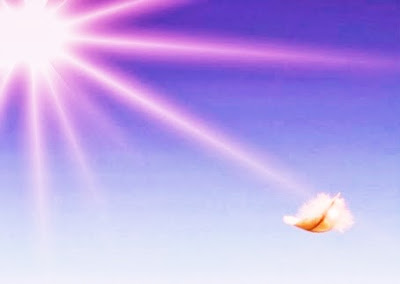 "They say a person needs just three things to be truly happy in this world: someone to love, something to do, and something to hope for."
(Tom Bodett)
What is Hope?
As a word, we scatter it like seed throughout our everyday conversations; we hope it won't rain, we hope to get there by two, we hope England will beat Slovenia, we hope you feel better, hope to hear from you soon. Yet this benign four letter word, so handy and familiar, has such huge connotations.
Hope is a word of wonderment, desire and longing, chance and miracles. A little word of really epic, Biblical proportions. It fuels our dreams, it holds Love's hand; life partners with Trust, they sit like a gentle mantle around the broad shoulders of Faith itself.
Heady stuff, this Hope. I've always loved Emily Dickinson's poem " Hope Is The Thing With Feathers": my association of Hope with angels, flight and rescue I suppose. Like many, I feel comforted when a white feather flutters towards me; a message of goodwill and encouragement from the heavens. Although in this part of Brighton, perhaps I should be more wary of flying feathers and the well-being of my feathered friends, Jonathan Seagull and his somewhat hooligan companions.
In a week when one of my neighbours has tried to do something unspeakable to Jonathan, the bird's hope and faith in general and in me in particular feels humbling. He was back in the comparative safety of my garden within an hour of the shameful incident,  around my feet and within spitting distance of the cat. I hope my neighbour realises that Jonathan is indeed a fine specimen of a species protected by the law; I hope Jonathan doesn't rely on that intelligence.
Hope is indeed the birds chirping in my garden each dawn and dusk, possibly recognising that the strange dweller of a place bedecked with lanterns, chimes and Buddhas is probably good for a digestive biscuit or two. Hope is my own persistent watering of what a friend described as a marooned twiglet until it became a fuchsia once more. Most essentially, Hope is that fuchsia.
Mankind is all hopefulness. We have built our society on Hope. Victor Hugo noted that our future is made up of today's hopes. And indeed we live our lives in the hope of becoming someone's memory.
Hope really does "spring eternal". Like Faith, it is naturally occurring; as essential to the spirit as nourishment is to the human body. Yet it's evolution can't be tamed or mapped by our sciences; we cant reproduce it in a test-tube. The unsung, extra-sensory gift; it's the Desert Island Discs luxury that we all have as standard/
A few years ago, I toyed with the idea of a bright tattoo. I wondered about a Celtic cross on my upper arm, but my sister's reminder that I've inherited sturdy Celtic limbs chastened me that I might resemble a merchant seaman. The only other design I was taken by was a pair of angel-wings between my shoulder blades. To me, they signified optimism and nurturing, being both protected and protective. Finally, friends convinced me I could hold on to my dreams without looking like a reject from The Only Way Is The A27.
Far away from the angels, I often hear folk hoping for darker things than a football score or a lottery win. They "hope" that others will get what they deserve, or come undone; terminal illness is often a preferred option. Can something as unsullied and beautiful as Hope really become hitched to a curse?
Hope is universal. Like Freedom, it is not divisible; you cannot have it at someone else's expense. I'm certain that Slovenians were praying just as fervently for an extra goal against England a few days ago; Hope cheers on both sides of what is, truthfully, only ever a Beautiful Game, favouring only skill and recognising fortune.
I'm equally sure that my seagull-hating neighbours hope I will pack up and move and take my feathered friends, chimes and lanterns with me. By return, I hope they'll leave me and Jonathan in peace. Hope is not partisan. And war, where Hope flourishes as battlefield flowers and kindles homefires - how can Hope ever be available to our enemies? The neutrality of Hope should be comforting: Hope didn't want conflict in the first place.
If I can find some inexpensive, vegetarian-friendly angel-wings in Brighton, I hope to wear them to our Pride festival this summer. Meanwhile, the white quill feather I found on my doorstep at the weekend is now propped in one of my garden pots. I've checked that it isn't one of Jonathan's. He's already given it a beady eye. I hope he doesn't mind. 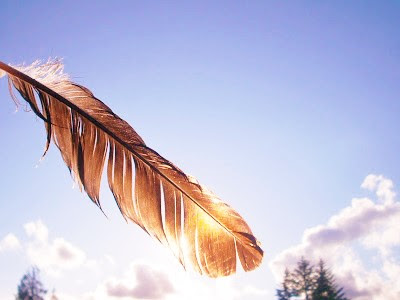 "Hope Is The Thing With Feathers"
(Emily Dickinson)

Hope is the thing with feathers
That perches in the soul,
And sings the tune without the words,
And never stops at all,

And sweetest in the gale is heard;
And sore must be the storm
That could abash the little bird
That kept so many warm.

I've heard it in the chillest land
And on the strangest sea;
Yet never, in extremity,
It asked a crumb of me. 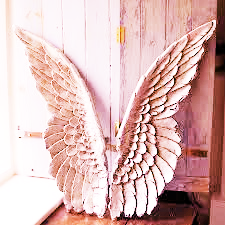 "Faith goes up the stairs that love has built and looks out the windows which hope has opened."
(Charles H. Spurgeon)
"The road that is built in hope is more pleasant to the traveller than the road built in despair, even though they both lead to the same destination."
(Marion Zimmer Bradley)
"Hope is a waking dream."
(Aristotle)
)
"Not About Angels"  Birdy