Matilda at the Pearly Gates 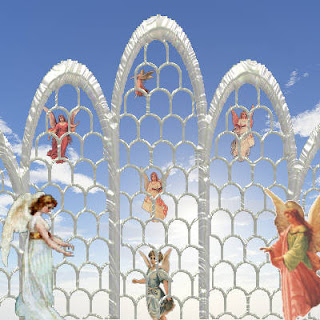 This post all started with another joke from Leigh of Lymington!

A blonde lady arrives at Heaven from Australia. A concerned St Peter meets her at the Pearly Gates.
"I'm so sorry," says St Peter, "but Heaven is suffering from an overload of goodly souls and we have been forced to put up an Entrance Exam for new arrivals".
"That's fine," says the blonde coolly, "What does the Entrance Exam consist of?"
"Just three questions" says St Peter.
"Firstly, which two days of the week start with the letter 'T'? Secondly, how many seconds are there in a year? And thirdly, what was the name of the swag-man in 'Waltzing Matilda'?"
St Peter tells her to go away and think about the answers and wait to be called.
So the blonde goes away and gives the three questions some considerable thought.
The following morning, St Peter calls her to him.
"Well then", says St Peter, "Which two days of the week start with the letter 'T'?"
"Today and Tomorrow" says she.
St Peter ponders for a while and decides that indeed the answer can be applied to the question.
St Peter continues: "How many seconds in a year?"
"Twelve," says she, "the second of January, the second of February, and so on, making a total of twelve!"
Bemused, St Peter shakes his head and says: "I'll allow the answer to stand, but you need to get the third and final question absolutely correct to be allowed into Heaven. Now, can you tell me the name of the swagman in 'Waltzing Matilda'?"
The blonde replies; "Of the three questions, I found this the easiest".
"Really?" exclaims St Peter, "What is the answer?"
"It's Andy," says the blonde triumphantly: ﻿" 'Andy sat, Andy watched, Andy waited 'til his billy boiled, Singing Who'll come a-waltzing Matilda with me?' "
And so the Australian blonde entered Heaven... 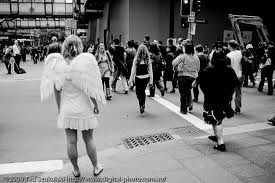 As a natural blonde, I can assure you that we lighter haired souls are merely characteristically lacking in eumelanin pigment polymers, not brain cells! As a lover of many-things-Australian including the late, great bush poet Banjo Patterson, I would like to confirm that the swagman in "Waltzing Matilda" actually has no name. The bush ballad was written by Paterson in 1895; the title is Australian slang for travelling on foot, "waltzing", with one's worldly goods in a "Matilda", which is a type of sack bag, slung over one's back. The song is now traditionally belted out at rugby matches and other huge gatherings: it actually narrates a literally haunting tale. A swagman, an itinerant worker in Australia, sits at a watering hole making tea in his billy can when a young sheep stumbles by. He promptly captures it to eat. He's then arrested for the theft and commits suicide, drowning himself in the watering hole; his ghost subsequently haunts the site, calling "Who'll come a-waltzing Matilda with me?" Always fascinating how popular culture is retained but reinvents itself.
Banjo Paterson died in Sydney in 1941; I managed to visit his grave in the northern suburbs of the city on a holiday there a few years ago. "Waltzing Matilda" remains Australia's best known and most widely sung song; frequently referred to as the unofficial Australian national anthem. The title and some of the lyrics are reproduced in "And The Band Played Waltzing Matilda", written by Scottish-Australian singer and songwriter Eric Bogle in 1971: in my opinion one of the most accessible and moving anti-war songs ever written. It describes the experiences of an Australian soldier injured in the devastation at Gallipoli during World War I; it's also been named in Australia's top fifty songs of all time, and The Pogues' version is a true tear jerker.
There are so many rousing versions of "Waltzing Matilda" I would like to recommend, from the late folk singer Slim Dusty to the more recent authentically "waltzing" version by Dutch violinist and conductor Andre Rieu (much loved in Australia). But surely Leigh's joke deserves a touch of Kylie? I love Kylie Minogue: essentially a blonde, modern Aussie icon, she has a naturally sweet sensuality that's very difficult to knock. After one too many Jack Daniels and cokes (which is actually only two), I have been known to go into Kylie Minogue mode, complete with little dance routines; possibly best left for another post. The clip here is from the opening ceremony of the Sydney Paralypmics in 2000, still five years before her own gutsy battle with cancer.

There: I knew there must be a way to get Kylie Minogue, Banjo Paterson, The Pogues and St Peter into my blog! 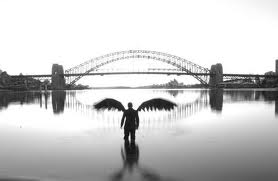