In black and white

"Trust yourself. Create the kind of self that you will be happy to live with all your life."
(Golda Meir) 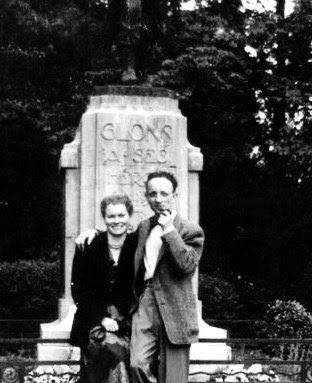 (All photos: Gigi, album) My Dad Tony with Mum in his native Belgium.

Today is the anniversary of my Dad's passing and he's now been apart from this seen world for more than half of my lifetime. One of the things I remember most strongly about him is laughter and indeed his laugh. For a man who was not tall and who was non-confrontational and contemplative by nature, Dad's laugh was big, sudden and random. He was generally softly spoken but he laughed like Sid James. American writer Anne Lamott once said that laughter is "carbonated holiness": I can see my Dad was a very spiritual man who was capable of great joy in small things.
There was an honesty in Dad's laugh. So often, I'm aware of manufactured giggles and mannered groans. Hunour these days often seems so structured and sophisticated, even class conscious. I've inherited Dad's very out-of-the-box sense of humour; it encompasses the bizarre and the slapstick and the everyday ironic. I often open up one of his belly laughs; my mother used to think it was something of a curse in a woman but now I feel it's a blessing; my Dad's little route-finder for joyfulness.
My Dad was a deep thinking and well read man but was completely free of pretension; he had no real material aspirations either, although he always wanted to do the best for my mother, and later on, for my sister and me. My Dad may have blushed a little bit about Brigitte Bardot, Bernadette Devlin (now McAliskey) and that blonde bird from Abba, but Mum was the love of his life. My Mum was aware that he'd been quite inexperienced romantically before her and he seemed to wear his faithfulness like his favourite tweed teaching jacket.
He'd been nearly halfway into a monastery when he met Mum; I can see how the tranquility and humility of the monastic life had appealed to my father. Lord knows what they would have made of his laugh. My father settled into teaching, interpreting and translating. His little study at home in south London was packed with books, newspapers, postcards from various monasteries and his cassettes of Gregorian Chant. Mum sometimes despaired of his lack of personal ambition later in life, but I realise Dad was always aware of the bigger picture from his little corner in it. It sounds cheesy, but he had high hopes for the world. 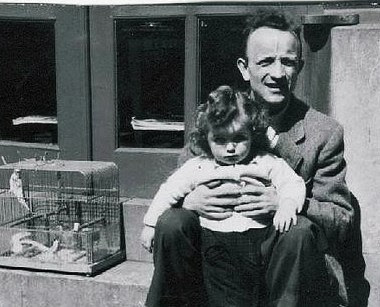 Dad with my sister.

After Dad died, I felt I envied my sister the quality one-to-one time she had with him when she was little. Once the family left Belgium for London and I was born, my Dad was always working; never less than two jobs and sometimes as many as four. When I was about seven years old, Mum would often go out on Saturdays, from lumchtime until the shops closed, with my Auntie Barbara and my sister, who was then fifteen going on twenty five (complete with heels and Audrey Hepburn cigarette holder). Still with yellow plaits and plastered knees, I felt very un-grown up and initially very left out: my Dad would be in his study for most of the day, translating and marking students' papers. But it became an easy habit that my Dad would emerge in time for the football results; even though Dad's idea of sport was "It's a Knockout"). He would make beans on toast or grilled kippers (these were the days when I couldn't even spell vegetarianism) and strong, sweet tea and we would watch "Doctor Who" together.
It occurs to me now that we didn't say very much; I would watch the good Doctor avidly while my Dad chuckled or tutted. He never picked up a newspaper or a book or looked bored. It was hugely comfortable and comforting just to sit quietly. I've realised across the years just how like my father I am. I love to laugh, I love music, colour and cleverness, but sometimes it's just lovely to be still and safe in your own company or with someone close.

"Laughter is the sound of the soul dancing. My soul probably looks like Fred Astaire."
(Jared Kintz) 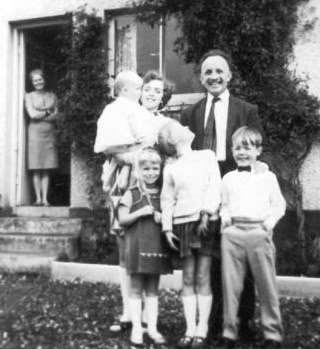 In Northern Ireland: Dad with his Poirot-style moustache, with my sister holding one of the baby cousins; my cousins Lucy and Charlie Joe are in front of him. I'm playing with my hair as Mum looks on from the doorway.

I'll acknowledge that I was usually described as being academically bright; it was quietly anticipated by my parents that I would probably follow Dad and become a teacher of some variety. I was never the kind of little girl who said she wanted to be an air hostess or even a princess. I wanted to be Tarzan's Jane at one point and then of course Dr Who's next lovely assistant. When I was in my early teens, at convent school and also having gone through all my preliminary dance exams, I announced that I wanted to be a nun or a ballerina. My Mum was exasperated and said I would do neither; that I was an eejit and would have to speak to my father. He was very calm about it all and didn't appear phased by the propositions of having a daughter in cloisters or on stage in tights. Having asked me why I felt I should or could do either, he simply said that from his point of view, it appeared that I could be a dancer and still pray, but that he didn't think there was a whole lot of pirouetting in most convents. He also told me I didn't have to be anything, but that I should try to do something with my life. He told me I didn't need to do anything other people might think of as "big" just for the sake of it. My Dad liked Victor Hugo's concise eloquence; he felt that death was really nothing, but not to have lived your life must be terrible.
Although he was a non-judgmental man, rights and wrongs were black and white to my father; he was assured of his own responses and responsibilities. He had a generosity of spirit and a talent for people that I feel made it very difficult to dislike him. Certainly, Dad didn't seem to have a bad word to say about anyone, although his sense of injustice was relentless. I hope I've inherited some of the latter at least: I take it as a compliment when I'm dismissed as an "effing do-gooder".
I haven't done anything big with my life and may never do. I can see now that my Dad could have been a writer, but he was essentially content with what some might have called the minutiae of his life. In the Great Scheme of Things for other folk, my Dad may not have done anything big: his home and family became his vocation. Yet after he died, I discovered Dad had funded several students in Africa so they could change their lives. His letters to various publications about injustice in Northern Irish politics brought him to the attention of both the paramilitaries and Scotland Yard. He was regularly sent jokes by Bishop Desmond Tutu; they carried on corresponding after Dad taught the bishop languages. Dad called him Des. And Des has that same unexpectedly raucous laugh that Dad had, that delightful burst of animation in the midst of such gentleness.
I once described my Dad as a mixture of Desmond Tutu, Richard Briers and Hercules Poirot, but essentially he was very much his own person. I know now you can't be true to another person or to your God without being true to yourself. Because of Dad, some things will always be very black and white to me: love, truth, faith, justice. For a quiet, not-tall guy, my father probably had all the biggest things covered.
When I was little, my Dad would often play records on Sunday afternoons; music that both he and Mum had been moved by over the years. In between the Irish Rebel Songs, Edith Piaf, Jim Reeves and Abba, there would usually be The Seekers; two songs in particular. Since both my parents died, I can't hear "The Carnival is Over" without dissolving. On the other hand, I've never found their version of Tom Springfield's "Another You" anything other than joyful. It sounds like an affirmation; I always feel it reminded my parents of how they met. It reminds me of how I still want to live my life. Sometimes. things really can be that simple.

"Do your little bit of good where you are; its those little bits of good put together that overwhelm the world."
(Desmond Tutu)

"Another You"  The Seekers

"If they gave me a fortune
My treasure would be small;
I could lose it all tomorrow
And never mind at all;
But if I should lose your love dear,
I don't know what I'll do
For I know I'll never find another you."
(Tom Springfield)
Posted by Gigi at 12:11:00 pm