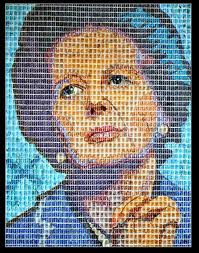 "No-one would remember the Good Samaritan if he'd only had good intentions; he had money as well."
"I owe nothing to Women's Lib."
(Margaret Thatcher)

Few people will probably be as divisive in death as in life as Baroness Margaret Hilda Thatcher. Aside from the rather beautifully staged pomp of her funeral at St Paul's Cathedral last week, her recent death has also sparked demonstrations and even some parties, from the former mining communities of the north, down to our very own economically challenged Brighton. The latter is of course infamous for all Thatcherites after the Provisional IRA bombed the Conservative Conference at the Brighton Grand Hotel in 1984.

I feel such "celebrations" are pointless as much as they are in poor taste: the woman has died; berating her "I'm alright Jack" attitude by parading and parodying it after her demise seems grossly hypocritical. But do I feel Margaret Thatcher should have had a ceremonial service with military honours, one step down from a full state funeral? Do I feel that those of us who pay our dues to this country and live increasingly hand-to-mouth should foot the estimated bill of £10 million? Hell no.
I can remember my Mum referring to "Thatcher the Milk Snatcher". Much has been made of Margaret's rise to become the first and still only woman prime minister of these lands. Yet her womanhood was as far removed from my ideals of the protection and equality of femininity as her historical female premiership was from my mother's long widowhood on a pension compromised by motherhood. Margaret Thatcher wasn't unduly bothered about lighting the way for other women: her cabinet was famously a "wimmin-free" zone.
I respect and accept that other members of my own family and some friends remain true-blue Thatcherites. Mine is the socialism of my Mum and Dad; a welfare state with the emphasis on a hand up rather than stop-gap handouts. A grocer's daughter from Grantham, Lincolnshire, she was fortunate enough to marry a rather wealthy man who cushioned her climb up the political ladder. She was a shop keeper's daughter who, sadly, seemed to forget the price of a loaf of bread.
I'm in agreement with such diverse talking heads as Ken Livingstone, Geoffrey Roberston QC and Gorgeous George Galloway who attribute many of the UK's socio-economic problems today to the destruction of industry and financial de-regulation which featured so heavily in the Thatcher administration. Human rights lawyer Roberson has described the era as one of "unalloyed greed", sold on the huge deception that, pretty much left to their own devices, bankers would allocate resources rationally and for the general good. Thus began a decline in saving and investment and an accumulation of private and public sector debts; a path where the cracks would eventually creep all the way to the banking crisis of 2008.
The destruction of manufacturing jobs was temporarily masked by opportunism and get-rich-quick schemes; skilled work gave way to a welfare "class"; house-building was usurped by estate agency. It appears to many of us that the policies of Cameron's government have a chillingly familiar ring to them, but there will be no bonanza of new oil to come to the government's rescue, or the country's.

So clearly, not a fan of Margaret Thatcher then. I admit that I cringed once more when I saw the reportage of her quoting St Francis of Assisi's prayer for unity and harmony as she took office in 1979. But I was even more uncomfortable and very sad watching reports from former industrial communities in South Yorkshire and Scotland of jeering and mocked-up funeral pyres, toasting Maggie's decline in hell. Whilst I object to paying for a song and dance about the death of this elderly lady, I don't wish to see anyone jig on someone else's grave. Margaret Thatcher may not have been for turning, but her death from cardio-vascular distress and stroke, following treatment for bladder cancer and dementia, confirms that the baroness is definitely not returning.

The Dean of St Paul's Cathedral, the Very Reverend Dr David Ison, played a central role in last Tuesday's very public funeral. He took up the deanery at St Paul's after his predecessor resigned over the "Occupy London" protest furore, when anti-capitalist protesters camped outside the Cathedral, close to the Bank of England. Dr Ison has also linked Mrs Thatcher's policies with those of today's coalition. He told CNN International that:
"You have to ask yourself the question: why it is, 23 years after she left government, Margaret Thatcher is still such a controversial figure and I think part of the answer is we still haven't come to terms with the hurt and anger many parts of society have felt because of the legacy of her policies. And there is some real work to be done here about the relationship between the rich and the poor in our society and how we can work together, instead of being opposed to one another. That's a particular agenda that I think that this funeral will be throwing up and highlighting."

I don't believe the gun carriage and the silencing of Big Ben were appropriate  but I do believe that respect and prayer for another person's passing are. May she rest in the peace we all eventually aspire to, no matter what our earthly advantages or failings. 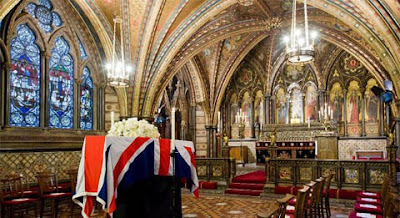 "Between the Wars" Billy Bragg


"I kept the faith and I kept voting,
Not for the iron fist but for the helping hand;
For theirs is a land with a wall around it
And mine is a faith in my fellow man;
Theirs is a land of hope and glory ,
Mine is the green field and the factory floor "
(Billy Bragg) 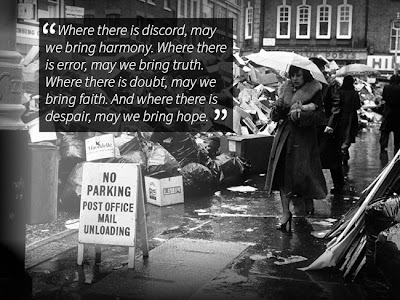 "Make me a channel of your peace:
It is in pardoning that we are pardoned,
In giving of ourselves that we receive,
And in dying that we are born to eternal life."
(St Francis of Assisi)