The roar of the Tigger

"Only the weak are cruel. True gentleness can only be expected from the strong."
(Leo Buscaglia) 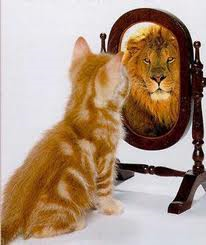 "Nothing is so strong as gentleness, nothing so gentle as real strength."
(St Francis de Sales)

When I was a little girl, I decided I was going to be Tarzan's Jane in the jungle: the jungle in question clearly my parent's long, lawned back garden, complete with trees, swing, vegetable patch and Dad's mysterious homemade shed. Within a year or so, I decided the jungle was a bit tame and Tarzan probably a tad boring and made the career choice of Doctor Who's Assistant. And this was long before I became smitten with David Tennant (best Doctor Who ever).
Often easily thwarted by my own lack of self-confidence, I can be utterly fearless in situations larger than the petty scrutiny of appearance, background or what is appropriate behaviour or position. I have a friend who believes that most folk can be identified with the characters from "Winnie the Pooh" stories; recently, she announced that I was "definitely a bit Tigger". Apparently, the similarity has much to do with my energy and enthusiasm rather than my bottom being made out of springs... Although I do tend to bounce about a bit when I'm particularly excited or enthused by something. Like Tigger, I do have a tendency to climb up things with no real consideration for how (or capacity) to get down again. Also like Tigger, I can appear mindlessly courageous when I am actually most scared and simply wanting to be stroked and given a slice of treacle tart. His bravado is usually borne from loyalty and protectiveness rather than cussedness or aggression; I like Tigger.
I was actually born in the Chinese year of the Tiger, a favourite animal of mine. I love cats, and tigers are just whiskery, big pawed, stripey kittycats. But I also love their sinewy prowess and effortless, graceful strength; if only they could embrace vegetarianism. There's a palpable power in gracefulness, as there is an ingenuity in the most instinctive courage. Although the Sunday school meekness that will inherit the earth is often seen as interchangeable with gentleness, I've always felt that true gentleness can be as in-your-face as the loudest roar.
Someone in my neighbourhood is trying to push me around at the moment; attempted bullying, if you will. I find it upsetting, most simply because I've tried to help and support this person. I've tried to show them kindness and tolerance. I realise now that they've interpreted my own brand of gentleness as vulnerability and weakness, probably enabled by my stature, blondeness and penchant for floral frocks.
I don't like aggression and find slanging matches distasteful and wearying. On a rugby pitch, I would much prefer to deploy my dummy sidestep and sprint rather than throw myself headfirst into a tackle. In spite of any health glitches, I'm aware of and thankful for my physical strength; I could definitely kick-box my way out of a paper bag, but I would infinitelyy prefer to dance or cuddle.

Christians learn about God's "relentless" tenderness and mercy as an essence of our faith. Aside from organised religion, our greatest heroes of justice and righteousness, folk like Martin Luther King, Mahatma Gandhi and most recently Nelson Mandela, have been staggering in their graciousness; their words of reconciliation resonate around the world and across class and culture. These people were natural leaders, defenders and champions; far from pushovers. Vociferously pacifist, they sadly also became threats to those whose insecurities fester on force, division and control.
Gentleness doesn't have to be meek; it's a bold, brave and sometimes isolating path to take through today's hyperactive, hyperbolic world. You have to be pretty tough to maintain your grace in the face of spite and injustice. It's very empowering to realise that refusing to claw your way up and over others has lifted you out of the fray. Personally, I believe that my God would want me to turn the other cheek, but still avoid being bitch-slapped in the first instance. I hope I'll always have enough self respect as well as compassion to refrain from back-biting and snarling; but the occasional roar from a lamb can confound the hungriest lion in the jungle.
If anyone from the BBC should ever stumble upon this blog, I would still like to be Doctor Who's Assistant.

"When you encounter difficulties and contradictions, do not try to break them, but bend them with gentleness and time."
(St Francis de Sales) 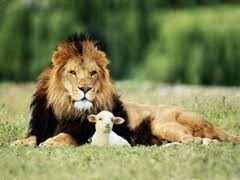 "Too often we underestimate the power of a touch, a smile, a kind word, a
listening ear, an honest compliment, or the smallest act of caring, all
of which have the potential to turn a life around."
(Leo Buscaglia)