"Is a dream a lie if it don't come true,
or is it something worse?"
(Bruce Springsteen) 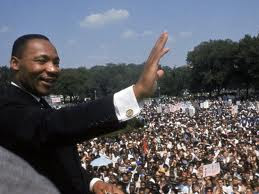 
On this day, Wednesday 28th August, exactly fifty years ago, a soft cheeked and slightly portly black American thirties-something stood up in front of the Lincoln Memorial in Washington D.C. to address more than a quarter of a million people. A fervent and eloquent Baptist minister, he eventually veered off his prepared speech, encouraged or even heckled by his friend, renowned Gospel singer Mahalia Jackson, to "Tell them about the dream, Martin!" As he improvised around his own vision of a united and just world, the fiery preacher in him came to the fore. With a single phrase, the minister from Atlanta, Georgia, joined the ranks of Jefferson and Lincoln and those whose words have helped to define modern America: "I have a dream today."
The rally was the Great March on Washington for Jobs and Freedom, one of the largest political or human rights rallies in the history of the United States. The march was organised by civil rights activists, labour groups and religious bodies, with the theme of jobs and freedom. Supportive of the innovations of the Kennedy administration, the march is widely credited with helping to pass the 1964 Civil Rights Act and the Voting Rights Act the year after.
The Baptist minister was of course the Reverend Dr Martin Luther King Junior. He had helped organise the rally, but his address to the masses at Washington and the watching world established him as one of the greatest natural orators in American history. Unfortunately, it also established his reputation as a radical, who would become the object of the Federal Bureau of Investigation's attentions for the remaining five years of his life.
The "Dream" speech is a masterpiece of rhetoric and poetry. King invoked the Declaration of Independence, the Emancipation Proclamation and the United States' Constitution. He alluded to both Lincoln's Gettysburg Address and William Shakespeare. The pastor in King referred poignantly to Psalm 30 and also quoted from the Book of Isaiah. King's speech has now been ranked the most important American speech of the 20th century by scholars of public address. It is as accessible, emotive and relevant today as in the long hot summer of 1963. Clearly, the power of the dream is still alive ; but does that mean little has changed?
Fifty years ago, King's words so moved my father that he copied out the full text, nearly twenty minutes long. I found the notebook in his study, long after Dad had passed away. When I myself was a fifteen year old Rebel Without a Clue, Dad encouraged me to properly read Dr King's speeches, particularly the Washington address. At the time, I was outraged that fascist groups marching through south London were being given police escort. My Dad explained that freedom has to be indivisible: you cannot have your own human rights at another's expense: my first real lesson in the intricate but simplistic truth of equality.
Today, a handsome and charismatic black man sits in the oval shaped office in the white mansion on the hill in Washington D.C. Now in his historic second term of office, President Barack Hussein Obama is married to the strong and beautiful great-granddaughter of African American slaves. In line with Dr King's own vision, Obama's daughters will study and socialise with girls and boys of all cultures and creeds. When I was fifteen, I dreamt this might happen but it still seemed improbable.
Yet the president struggles with his own Senate to establish healthcare and social protection for the disadvantaged of all colours. Inspite of Obama's extraordinary rise, the Senate's glass ceiling for African Americans still seems largely unbreakable. In 1963, there were no sitting African American senators in Congress; this year, briefly, there were two, for the first time in history. Incredibly, in Obama's united nation only three states have ever elected black senators.
In recent weeks, when an innocent black American youth was gunned down after being mistaken for a potential offender because of his colour, age and dress, Obama ruefully noted that the boy might have been him thirty years ago, or indeed one of his own offspring today.
I've reproduced some of the "Dream" speech here, lifting away direct references to places and events in America. The message remains undiluted in universality. The bloody reality of racial and cultural prejudice and genocide stalks through Egypt and Syria and across the globe today. Even in comparatively safe and liberal areas in the UK, such as my own Brighton, division between the haves and the have-nots is palpable and increasingly uncomfortable.
We have still have far to go to realise Dr King's dream. He told us that: "Faith is taking he first step, even when you can't see the whole staircase."  The reverence of his Washington speech today continues to lift people onto that first step. You've got to have a dream; if not, how you gonna make a dream come true? 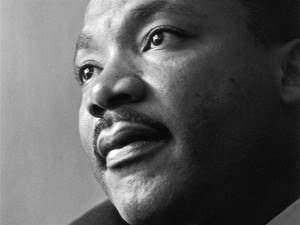 "I am happy to join with you today in what will go down in history as the greatest demonstration for freedom in the history of our nation.
But we refuse to believe that the bank of justice is bankrupt. We refuse to believe that there are insufficient funds in the great vaults of opportunity of this nation. So we have come to cash this cheque, a cheque that will give us upon demand the riches of freedom and security of justice.
We have also come to his hallowed spot to remind America of the fierce urgency of Now. This is not time to engage in the luxury of cooling off or to take the tranquilizing drug of gradualism.
Now is the time to make real the promise of democracy.
Now is the time to rise from the dark and desolate valley of segregation to the sunlit path of racial justice.
Now is the time to lift our nation from the quicksands of racial injustice to the solid rock of brotherhood.
Now is the time to make justice a reality to all of God's children.You have been the veterans of creative suffering. Continue to work with the faith that unearned suffering is redemptive.I still have a dream. It is a dream deeply rooted in the American dream.
I have a dream that one day this nation will rise up and live out the true meaning of its creed. We hold these truths to be self-evident that all men are created equal.I have a dream that my four little children will one day live in a nation where they will not be judged by the colour of their skin but by their character.
I have a dream today.I have a dream that one day every valley shall be engulfed, every hill shall be exalted and every mountain shall be made low, the rough places will be made plains and the crooked places will be made straight and the glory of the Lord shall be revealed and all flesh shall see it together.With this faith we will be able to work together, to pray together, to struggle together, to go to jail together, to climb up for freedom together, knowing that we will be free one day.
This will be the day when all of God's children will be able to sing with new meaning: "My country 'tis of thee, sweet land of liberty, of thee I sing. Land where my fathers died, land of the Pilgrim's pride, from every mountainside, let freedom ring!"When we let freedom ring, when we let it ring from every tenement and every hamlet, from every state and every city, we will be able to speed up that day when all of God's children, black men and white men, Jews and Gentiles, Protestants and Catholics, will be able to join hands and sing in the words of the old spiritual: "Free at last, free at last. Thank God Almighty, we are free at last." 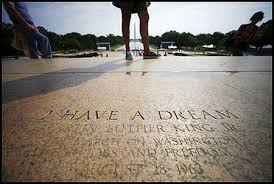