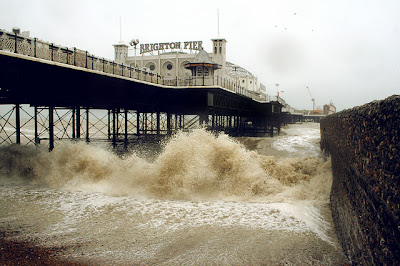 "One of the first conditions of happiness is that the link between Man and Nature shall not be broken."
(Leo Tolstoy)

The storm that crashed against the south coast of these islands before ripping it's way upland on the 27th and 28th of October has inevitably left it's mark on Brighton. A local estate agent told me he'd been retrieving TV aerials, roof tiles and garden furniture from his rental properties from literally high and low across the city. Having previously walked the seawall at the marina, apparently the largest in Europe; I was staggered to see footage of the waves dwarfing the wall and the yachts, almost reclaiming the manmade enclosure to the open sea.
"Storm St Jude" was named after the patron saint of lost causes, arriving with a crash on the eve of his feast day. It certainly carved a desperate path; I'm respectful that tens of thousands of people across this county and others were left without power for days and that four people lost their lives in the UK. A further thirteen people have died as Storm Jude evolved into Cyclone Christian, wreaking destruction across northern and eastern Europe.
My little house is a hundred and fifty years old and full of leaks, creaks and gremlins on a daily basis. Faced with torrential rain and predicted gusts of more than eighty miles an hour, I brought in garden mirrors, lanterns, tree baubles and next door's cat and tied down everything else; including Noel the seven foot Christmas tree after even he was blown over in his ridiculously heavy pot. The house, Ginger Tom and I braced ourselves. I watched my tall pear tree appear to double over against the wind at around two in the morning, while the guardian angel sun-catcher in it's highest branches (I couldn't reach her without a ladder) was whipped about mercilessly.
As Monday opened up and the winds dropped to a manageable 60, I realised that my house and garden were largely intact. A section of guttering has loosened, but then Jonathan Seagull has been using it as some kind of high-rise latrine for a couple of years. All the paint above my bathroom window has ripped away, taking a layer of mortar with it, but I've never liked that stale buttermilk colour and intend to paint the house a zesty yellow as soon as possible. My windows seem spattered with every kind of seaside muck that could be airborne, but they're due a cleaning anyway.
In the garden, only one of a few marooned tree baubles didn't make it; even the tiniest, most delicately budded patio roses and fuchsias have only conceded some petals. The pear tree has uncurled to it's full height; the angel still miraculously spinning round at the top. I went round oohing and aahing, patting potplants and shrubs reassuringly, while Ginger watched from the safety of the kitchen step, clearly bemused that he'd spent a day and night sheltering with an idiot.
The BBC's southeast reportage seemed to focus on Brighton, with one hapless reporter stationed on the pebble beach in front of the skeletal West Pier. Blue-faced in his puffa jacket and woolly beanie hat, he flapped about a bit and spluttered that this type of weather was not uncommon on this windy little edge of East Sussex. Worryingly close to the waves himself, he stressed that the Sussex police had warned folk to stay away from the piers and indeed the sea for the next few hours, just as a hardy local family splashed past him while he struggled to stop his microphone from hitting him in the face. 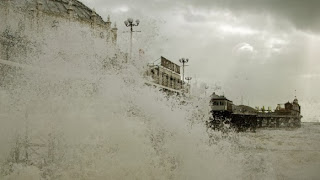 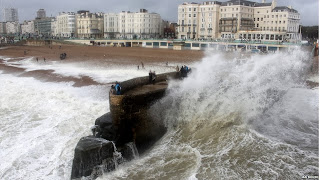 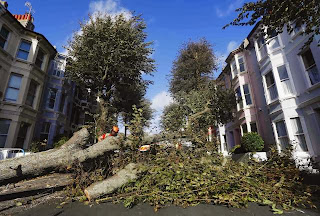 I was thankful to see the West Pier still standing, albeit at a more precarious angle than ever before. The pier was built within a year of my little workmen's terrace and it's remains are Grade II listed, one of only two piers in the UK to be granted what should be a level of protection. Not that the West Pier has been shielded from outrageous fortune in any way in her long history. Yet, after three fires, the great storm of 1987 and several others, countless horrendous winters (including each one since I moved here) and even being crashed into by an RAF fighter plane in 1944, the West Pier has never been completely destroyed.
On several occasions, the structure has had to be partially demolished for safety reasons. Now completely severed from the shore, the pier is nonetheless increasingly part of this city. The remaining fretwork seems to float in the rising and falling tides; her fragility belies the Victorian engineering that keeps her cast iron legs firm in the seabed. Now frequently compared to am upturned fruit basket or burned out wedding cake, she was known as "The Pleasure Pier" in her heydays, I know some people find the pier a sorry sight. Technically, she's been terminally deteriorating since the 1970s; to those of us who love her and find her beautiful, the West Pier is constant to the point of persistence and embodies the spirit of the city of Brighton.
Walking down to the West Pier after St Jude, I wasn't surprised to see several others standing in the cracked sunshine and sea breeze, all there for the same reason. One very dapper middle-aged man with what I think was a French accent described her as "wretchedly lovely". I think the West Pier is a bit like a Bronte heroine; ageless and virginal but fatally bedraggled in sodden hooped petticoats. For every person who sees the old pier as an eyesore that should be completely dismantled, there will be many more who cherish her as an essential part of Brighton beach's skyline. Her iconicity has swelled as her original purpose built structure has diminished.

It's been weeks since I've posted on this blog. I almost wish I could say it's been due to sheer volume of work, being away with friends or even just doing possibly unmentionable, hedonistic things. Alas, I can't rely on any of these excuses.
It's true that I've been working rather difficult hours, but the most complete story of my extended writer's block is that my heart just hasn't been in it. My heart has been scuttled away like a deflated little bird. Like the West Pier, it feels like it's had the stuffing kicked out of it. Aside from any continuing neighbourhood unpleasantness, beyond the bereavement, unemployment and upheaval of fortune of the past few years, it felt as though something had finally broken me. One gust just too harsh, one wave too fierce. Mark Twain once said that a broken promise was better than none at all; much as I admire Mr Twain, I've often thought him uncharacteristically, utterly wrong on that one. Promises hold both the recognition of long held wishes and our hopes for the future; a broken promise or dream damages who we've been and scars who we've yet to become.
A few people who actually read this blog but have never met me realised something was wrong and I'm grateful for their concern and wishes. My friend Lin put it quite bluntly: "Not blogging, not talking: not you! Sick??" My confidence in myself and my instinctive faith in others is obviously dented, but I find I'm still here, just as the West Pier is right where I left it. Sometimes, the strength isn't in holding firm against the break but in what you do with the broken pieces. In circumstances that I guess were quite different from Mr Twain's, Oscar Wilde noted that broken hearts allow God and love to seep in. And so you can either focus on what's tearing you apart, or on what's holding you together.
Storms like St Jude unleash the omnipotence of nature but also magnify the resilience of even the smallest plants and creatures. For some reason, "The Lightning Strike" has always been my Snow Patrol song: I have the expressed permission of Mr Lightbody to add it to this post that breaks my writer's block! I'm sure my little house, for all it's cracks and groans, will stand beyond the end of my years; I hope the West Pier might do the same. Even with feet of iron, that kind of fortitude feels as organic as that of my pear tree or the tiny buds on my patio roses. I guess it's all in the foundations.
*Especially at this time for Gill A, Luci, Marian and Stuart* 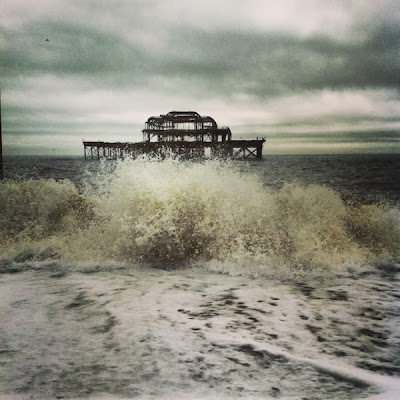 "The world breaks everyone, and afterward, some are strong at the broken places."
(Ernest Hemingway) 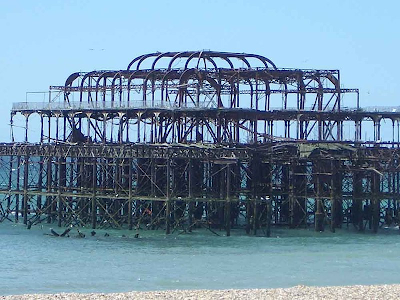 "Man is born broken. He lives by mending. The grace of God is the glue."
(Eugene O'Neill)

"The Lightning Strike (What If The Storm Ends)"  Snow Patrol
"What if this storm ends
And I don't see you,
As you are now
Ever again?
Painted in flames,
All peeling thunder;
Be the lightning in me
That strikes relentless"
(Gary Lightbody)

"The violets in the mountains have broken the rocks."
(Tennessee Williams)
Posted by Gigi at 2:06:00 pm