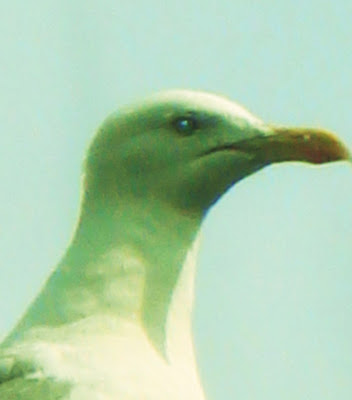 Sometimes, it can seem that the very people we care about or lean on leave us, whether voluntarily or reluctantly. Affinities, vows, rings, paper and words; the things that are seen to bind can fall away quite suddenly. And sometimes, animals seem to appear through the cracks in our daily lives, nudging their way into our conscience and our consciousness. Even long domesticated animals remain wild at heart. We may cage them, harness them, clip and tag them,  ply them with treats and catnip, but they still choose whether or not to love us. It's true that some animals see their humans as a consistent supply of ready meals, yet even so they may never develop a brand loyalty to us. And the unsolicited and unbound companionship of a truly wild and free creature is always a precious thing.
Jonathan Seagull didn't so much nudge as muscle his way into my life, bill first, through the catflap I inherited from the previous home-owner. Ginger from next door has only just mastered it, after more than two years of cajoling, nagging and motivational pep talking from me. It has a Perspex flap, so I can see which neighbourhood scally-cat or fearless fox has come calling.
Very shortly after I moved into the little house, I heard an insistent and quite irritated tap-tapping at the catdoor one squally night. It spooked me. Peering from the darkness of my kitchen on my hands and knees, I saw a wild-eyed gull staring back at me. I looked. He looked. Suddenly he flapped and bashed the catflap again. In true Hitchcockian-blonde-I've-seen-"The Birds"-style, I screamed. He screamed back. After a while, he hopped onto my garden bench, setting the security light off. From the back window, I could see what a big bird he was. Herring gull; full grown, sharp eyes, impressive bill. And a gammy left foot which he couldn't quite put down. Just as he was about to give up and started to spread his wings, I opened the back door.
"Hello Mr Seagull. How are you?" Even I realised how pathetic this sounded. The bird lowered his wings, cocked his head and surveyed the human he'd chosen to call on, resplendent in mini leopard print bathrobe and flipflops. I'd never seen a gull look disparaging before; I've now become familiar with that look.  "My name's Gisele, Mr Seagull." Seldom in my life have I felt so foolish, which is saying something.
"Mr Seagull" would quickly became "Jonathan", after the title character in one of my favourite books. Richard Bach's "Jonathan Livingston Seagull" is a soaring analogy about spirit; the story of a seagull's search for perfection through flight. After feeding him oven chips that first night, I assumed he would never return to my staunchly vegetarian home, but I did hope. My Dad used to rescue and tend to injured birds back in south London; most of them returned to the skies. One distinctive and clearly grateful pigeon called "Roucal" returned to my Dad's nesting box and bird-table for many years. But I had no real experience of seagulls.
I couldn't get near to his sore foot of course, but as he snapped at the chips I gathered that it was tender underneath. I realise now that he wouldn't have been able to swoop for food or perch properly to eat it. It was raining persistently when Jonathan first arrived and there were muddy puddles forming in the cracked cement in my backyard.. As I scattered his second serving of chips, I thought I might try a few drops  of TCP in the puddles he was hopping through. I had no idea if this might be beneficial in any way, but eventually I realised he was staying relatively still in one doctored puddle.
He stayed for about an hour, until there were no more fresh chips and he'd tired of my wittering. He flapped up and out into the darkness, leaving me and my bathrobe drenched, starving and startled by the whole episode. The next morning I ventured out to clear up any soggy leftovers and possibly a copious amount of droppings. A splutter of feathers rushed down from my back roof. I assume he'd slept there overnight.. Still largely balancing on one leg, he ate my breakfast crumpets with unconcealed disdain. He flapped off skyward after another hour and I headed off to the laptop to Google the life and culinary loves of the herring gull.
Jonathan's foot healed over the next couple of months. We discovered that he liked raw broccoli but not asparagus, was partial to cat biscuits and over-ripe tomatoes and would tolerate my vegetable fingers in the absence of fish.  He loved salmon flavoured cat treats but spat the cheesy ones out at me with ferocious accuracy. His love of all things spud rivals my own; maybe Jonathan had an Antrim mother too. As he healed he was able to sit on my garden bench and table and perch on the old shed. As his landings and take-offs became more adventurous, he terrorised the other garden birds and traumatised next door's cat. He monopolised my large basin birdbath, sometimes completely up-ending it during crash and splash landings.
He's even ventured into the kitchen when I've left the backdoor open without properly acknowledging his presence. He's filled my front and back guttering with moss and more unmentionable things as he's gradually commandeered the whole of my roof. His bad-boy landings in a confined space have destroyed pots, plants and lanterns. He quickly learned how to manipulate the security light and will still tap at the catflap from time to time, his calling-card. 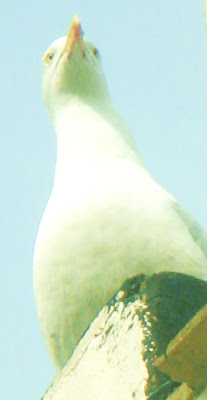 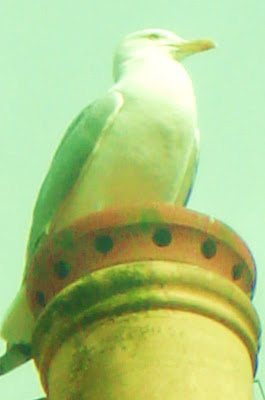 Out front, Jonathan will sit on random parked cars outside my window and flap about while I'm on the 'phone. Unattended for too long, he will crap all over the cars, from bonnet to boot. He craps on my garden bench and table, on my neighbours' washing and even on the cat if possible; and once on me, which I feel was memorable for both of us in differing ways. I know this is said to be lucky, but it feels terribly unfortunate at the time.
More than two years since he first knocked at my catdoor, his visits have become far less frequent but I now know not to worry if he doesn't appear for a month or more. People nod sympathetically when I say I know he'll always come back. Herring gulls have been known to have long memories and can live for twenty to thirty years. Jonathan seems quite determined to me and I probably seem quite devoted to him. I think he was the gull equivalent of a sulky mid-teen when he first arrived. Although I've learned that they're not pack creatures, he's sometimes landed with a couple of smaller but quite hooligan mates in tow, as though I've opened a Wild Bean Café in the garden. Ginger the cat has been jittery for days afterwards.
I love the ubiquitous presence of seagulls in this city. It's possible to feed them by hand along the seafront and they're a natural alarm clock. Some gulls are screechers, some are squalers, others laugh. Jonathan Seagull is a particularly loud laugher. "Ahahaha!" announces his arrival or passage overhead, pitched somewhere between machine gun rattle and a young Sid James. A couple of months ago, he sat on my roof for over an hour, periodically cackling at a friend and I as we attempted some DIY in my garden.
This summer, he felt comfortable enough to bring his lady-seagull to my roof, copulating quite noisily and somewhat precariously on top of my chimney pots. Of course, he laughed all the way through sex as well. I tried to carry on painting my plant pots as best I could, embarrassed but incredulous at his stamina and her forbearance. Herring gulls tend to mate for life, unless one of them falls off a chimney pot.in the throes of passion.
I appreciate that not all Brightonans are as fond of our increasing seagull population. I've often heard the expression "rats with wings"; it's true that the omnivorous gulls are natural scavengers. Brighton is a city of seaside kiosks and pavement cafes, spawning kerbside binbag collections and overflowing communal bins. As the gulls become more urbanised, they see rooftops as handy inland cliffs. This summer, hundreds of gull chicks had to be rescued by local conservationists after sliding of roofs (the chicks; hopefully not the conservationists). Over the past couple of years, the pond in Queen's Park has become a seagull nursery, with some kindly residents keeping a wary eye on dozens of chicks while the adult birds are off being hunter-gatherers.
I've never really liked the word "pet" as a term of possession. I'm as much Jonathan's human as he is my gull. I'm probably not his only human, but his presence in my garden and in my life is pretty special. On the absolute downside, Tippi Toadlet seems to have disappeared and I often fear for the smart slow-worm (called Norris, of course) who frequents the far corner of the garden by the fig tree. But the friendship of Jonathan Seagull has been an unexpected blessing.
During the bright, hot days of August, Jonathan sat on the lowest part of my roof for an hour or so, cackling and posing for photos, which I've shared here. This weekend, grey and dank, he turned up again; watching me watching the cat watching him. In the midst of the unpleasantness from some featherless neighbours, he's been an untethered yet calming presence. However, his decision to crap on my neighbours' washing line yet again can't really have eased the situation.
He can and will always fly away. With the graces of flight and speed, he travels to places I will never see. Yet somewhere on the map of a seagull's life, I'm one of the points called home. I've often thought it fortunate for Jonathan that God directed a beleaguered seagull to an animal loving potato eater. I suspect Jonathan knows that I'm the fortunate one.
﻿
"Jonathan Seagull discovered that boredom and fear and anger are the reasons that a gull's life is so short, and with those gone from his thought, he lived a long fine life indeed."
(From "Jonathan Livingston Seagull", Richard Bach) 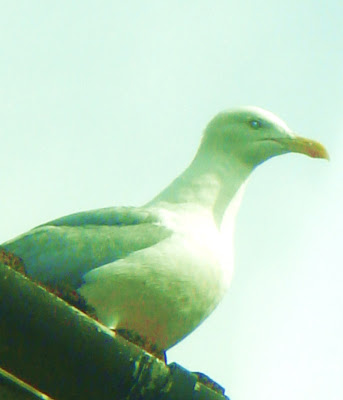 "Heaven is not a place, and it is not a time. Heaven is being perfect. -And that isn't flying a thousand miles an hour, or a million, or flying at the speed of light. Because any number is a limit, and perfection doesn't have limits. Perfect speed, my son, is being there."
(From "Jonathan Livingston Seagull", Richard Bach)