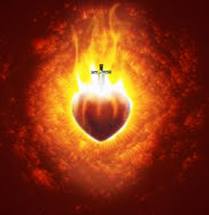 "The heart is the only broken instrument that works"
(T E Kalem)
Colleen writes a lovely blog called "Thoughts of Grace" . She has a very gentle turn of phrase which is also extremely resonant. About ten days ago, she posted about the reassuring "click click" of her beloved husband's mechanical aortic valve replacement: for the past fourteen years she's been able to hear his heartbeat without a stethoscope. Colleen also wrote that sometimes we forget to listen for the heartbeat of God.  I'm often silenced by the beauty of the words of others these days and this was one such moment.
I recently read somewhere a quote from The Book of Ezekiel, about God giving man a singleness of heart and replacing our hearts of stone with tender ones of flesh. Lately, I've been struggling to keep my head above the waterline with many things: trying to keep up with friends' relationships, stressing about what people think of me, counting pennies instead of sheep at night. My own little heart is not so little as it's enlarged on one side and a common or garden chest infection has introduced a wee atrial flutter: beat beat beat skip skip beat. This could be due to many things, including stressing over all of the above!  Of course I've focused on it and have been drawn into myself. I listen to "outside" noise looking to be irritated by it, I listen to the opinions of others, I listen to background music; and I get hung up on the irregularities of my own heartbeat. What I really need is to be quietened by the constance of the heartbeat of God.
God doesn't succumb to stress or atrial fluttering. His beat never skips. It's the primeval pulse, the essence of vitality, peace and reason sought by the new age crystal practitioners in Brighton's North Laine as much as by the suited and booted church regulars taking their love to the altar, their babies to the font, and their flowers to the cemetery. Listen; and you will find it in the murmur of well wishers, the unsolicited greetings of strangers, in birdsong and the cheerful nonsense of children, in the rhythm and ritual of the Mass, in the ticking of your late father's watch, in the certainty of your own name from another's lips. It's in the hush at either end of each day, it's the breathing space before words spoken are heard, it's the soft echo of longing, remorse or forgiveness of everything unsaid. 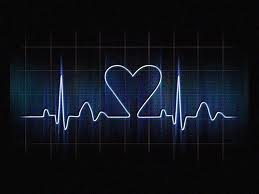 My Mum was a petite lady whose frailty in her later years belied the strength of purpose of her own enlarged heart. The congenital failure which claimed her last beat started with a hole in her heart, discovered after scarlet fever as a child. During one of her last cardiac checkups in 2010, the consultant was incredulous that although the left side of her heart was barely functioning, she was still alive. Ironically, whatever her faults and the fallouts of her Norn Irish temper, my Mum was known to be all heart. After Dad died, Mum and I clung together through the tantrums of my teenage years and she indulged my penchant for various indie, protest-pop and rock bands. Once introduced by me, she and Bruce Springsteen got on like a house on fire. She came to see The Boss at Wembley Stadium, leaning on a walking stick after a hip replacement (Mum, not Bruce) and stood for his four hour show, thumping the ground to her favourite songs. She later complained that, although she thought he was "smashing", he could have played for a bit longer for the money. Towards the end of her life, as Mum grew more weary of being housebound, I would often chivvy her into watching the music chart show on TV; I can still hear her today saying such and such a tune had "a good beat". Somewhere in the brash eighties production of "Dancing in the Dark", I can still grasp her walking stick keeping tempo. I wasn't there when Mum's heart gave up the beat; in the dreadful fester of days afterwards, I have no idea when her rhythm slipped in step with mine. Now when my heart skips, I can feel my Mum beating for me, just as she did from before I drew my first breath.

A couple of weeks ago, I heard God's heartbeat loud and clear during a Mass for the Sick. The service took place in the Hampshire parish where my Mum is buried, and where I've since made some very dear friends. As one of the seven sacraments, "Extreme Unction" was known as the blessed anointing of those who were terminally ill. Since 1972, the Roman Catholic Church has used the name "Anointing of the Sick" and the sacrament is extended to all those who are suffering in mind or body. 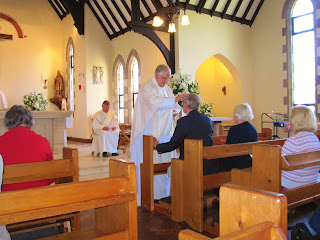 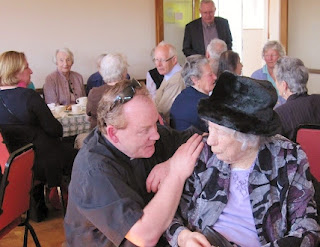 Photo: Frances
The Anointing of the Sick is given to restore and strengthen the body and the spirit; and to enable a state of grace for any continuing journey with pain or anguish. That Sunday, I watched other people after they had received their blessing, with a slight smile and an upward tilt to the chin. Several people I spoke to said they felt such peace after the mass. I also felt that the congregation and the men who were anointing them were moving quietly in step with the heartbeat of God. Intention, purpose and effect seemed to beat as one.

When my little cat Sooty was terminally ill, with a chest tumour that was growing over her own heart, I often pressed my cheek to her fur for the familiarity of it and also to catch her brave little heartbeat. I miss her terribly, and often find myself reaching across the stillness of a moment to rekindle that scent and softness; her beat. When I'm even more still, I feel I can catch other inexorable rhythms finely underpinning every traffic hum, every tick of every clock in my home; and yes, my own sporadically dysfunctional beat beat beat skip. I believe we live between God's heartbeats, carried by His constancy. When our own hearts flutter and finally fail, I believe our names are still found by others in His comforting rhythm. His pace is oblivious to our progresses, stresses and turmoil: His love doesn't miss a beat; He is the pacemaker of the world.﻿
﻿ 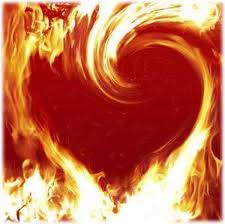 "In prayer it is better to have a heart without words than words without a heart"
( Mahatma Gandhi)
"If I Should Fall Behind"  Bruce Springsteen
Posted by Gigi at 11:58:00 pm