This Woman's Work: The Visitation 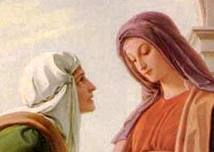 "My soul doth magnify the Lord : and my spirit hath rejoiced in God my Saviour.
For he hath regarded the lowliness of his handmaiden"
(The Magnificat,  from The Book of Common Prayer)

Last Thursday was the Feast of The Visitation, when young Mary carrying Christ in her womb went to visit her cousin Elizabeth, who was known to be far beyond child-bearing years. The older woman was aware that she was already carrying her own blessed baby; a son who be known as John the Baptist and would prepare the way of the scriptures for Mary's son. When we were at school, we learned from Luke's gospel that Elizabeth greeted her cousin;"Blessed art thou among women, and blessed is the fruit of thy womb"; Mary responded with the beautiful prayer of the Magnificat.
I've been laid low with a chest infection for a couple of weeks now, but I wanted to share, somewhat belatedly, a lovely latter-day sonnet about this meeting between the women, written by the poet, musician and Anglican priest Malcolm Guite. Simply called  "The Visitation", I think it captures the wonder and devoted acceptance of both women and something of their intuitive love and strength. Mary would have been a virgin of about fourteen or fifteen; today, a gymslip mum. There are so many depictions in Marian art highlighting her ethereal beauty and grace, but I always feel those that show her guilelessness and girlishness are incredibly moving. Beyond the sheer enormity of becoming the vessel of God, she would face the gossip and disbelief of friends and strangers alike and would need to trust herself to the care of her betrothed Joseph: he in turn would need all his devotion to defend her honour and faithfulness. Today, Joseph would be pitied on the odious Jeremy Kyle Show. And it's often forgotten that Mary was a child herself, committed to giving birth in disadvantaged circumstances, at a time when death in labour was not exceptional.
Mary, Elizabeth and Joseph are part of a story of feminine strength and wisdom, the eternal parental bond and of unerring faithful love in all it's forms which still resonates. 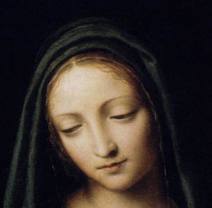 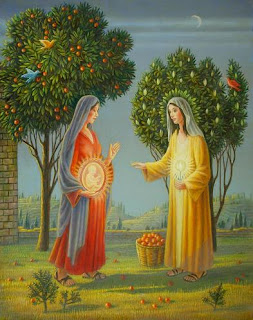 "The Visitation"
(Malcolm Guite)
Here is a meeting made of hidden joys
Of lightenings cloistered in a narrow place
From quiet hearts the sudden flame of praise
And in the womb the quickening kick of grace.
Two women on the very edge of things
Unnoticed and unknown to men of power
But in their flesh the hidden Spirit sings
And in their lives the buds of blessing flower.
And Mary stands with all we call ‘too young’,
Elizabeth with all called ‘past their prime’
They sing today for all the great unsung
Women who turned eternity to time
Favoured of heaven, outcast on the earth
Prophets who bring the best in us to birth. 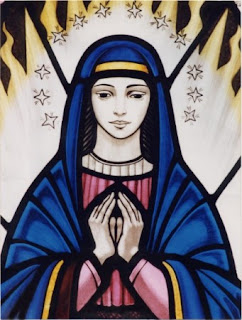