The Saint of the Jet Stream

"St Swithun's day if thou dost rain,
For forty days it will remain.
St Swithun's day if thou be fair
For forty days 'twill rain nae mare"
Certainly in Brighton and around Hampshire, where I've been staying for the past few days, it didn't  noticeably rain on St Swithin's Day - 15th July. Of course, it poured with a vengeance the following day, surely not the last sodden Monday before the end of the "summer holidays" in the UK. Originally called Swithun, his name has become synonymous with British weather lore, and possibly further afield. However, he's scarcely mentioned in any document of his own time. He's known to have been Bishop of Winchester between 852 to his death on 2 July 862: his death is entered in the Canterbury manuscript the "Anglo Saxon Chronicle" for that year. Over than a hundred years later, Swithun was adopted as patron of the restored church at Winchester, formerly dedicated to saints Peter and Paul. His body was then transferred from an almost forgotten grave to the new basilica at Winchester in 971, an event which does seem to have inspired contemporaneous reports of numerous miracles.

Swithun's revival then gave rise to a mass of legendary literature. Notably, from a monk called Goscelin of St Bertin, we learn that Swithun was born in Hampshire in the reign of  Egbert of Wessex and that he was later ordained priest by the Bishop of Winchester. Renowned and respected, he was regarded as a close friend and adviser by Egbert, who appointed him tutor of his son Aethelwulf. He would later be appointed Bishop of Winchester under the patronage of Aethelwulf. In his new office he quickly became known for his zeal in building new churches and his passion for restoring old ones. He was also a pious and humble man, known for making his diocesan journeys on foot and inviting the poor to banquets which excluded the rich. 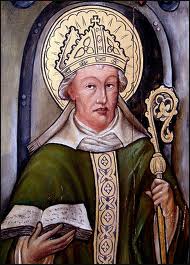 Swithun's best known miracle was his restoration of a poor widow's basket of eggs that workmen had maliciously broken, although there are many other stories of his compassion and humility. Before his death, he instructed that he was not to be buried within the church, but outside in a "vile and unworthy place". Initially, Swithun was accordingly buried out of doors, where it might be subject to the trampling feet of passers-by and to the inclement weather from on high. In 971, his body was moved to a new indoor shrine; his weather-lore legend might be traced back to an uncommonly heavy downpour on the day of his re-interment, seen as a sign of the saint's displeasure that his remains were being moved against his wishes. Other chroniclers have suggested that the legend derives from the tremendous rainstorm which occurred on St Swithin's Day in 1315. 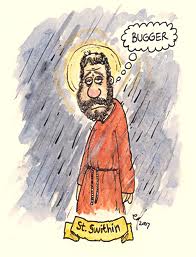 However, the meteorological interpretation is relatively straightforward. Most people are familiar with the concept of jet streams: powerful air currents caused by a combination of the earth's rotation and atmospheric heating from solar radiation. The position of the northern hemisphere jet stream around the end of June and into mid July indicates the position of  the frontal zone of our weather system: this in turn determines the weather patterns (hot / cold, wet / dry) for the rest of the summer. Whoever originally told the tale of the St. Swithin's Day deluge may well have been aware that the summer weather patterns established at the beginning of July tend to persist throughout the subsequent few weeks. This is statistically proven in 8 out of 10 years.
Little wonder that Swithun's weather rule is also known in other western European countries. In France, they say "Quand il pleut a la Saint Gervais Il pleut quarante jours apres - If it rains on St. Gervais' day (19th of July), it will rain for forty days thereafter". Unfortunately, or fortunately depending upon your viewpoint, I know nothing of St Gervais! 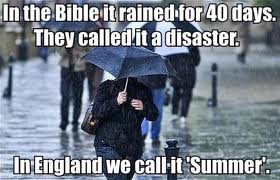