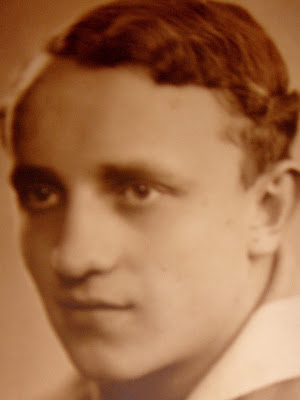 "Change your opinions, keep to your principles; change your leaves, keep to your roots"
(Victor Hugo)
For a quiet man of small physical stature, my Dad had a big, raucous laugh, ala Sid James in fact. I've inherited this sudden and often totally unsolicited guffaw: my poor Mum would frequently choke on her veggie lasagna when something random had suddenly tickled me. My Dad also had a big heart, a great wit and a vast conscience. Today would have been his birthday: he would now be quite an old man if he hadn't died a relatively young one. I watched my Mum weather the seasons of her life, but to me my Dad remains a man in his prime, looking out for us. He died unexpectedly and quickly just a month after my sixteenth birthday; I've been without him for more years than I physically "knew" him, but I feel my Dad's presence grows stronger each year as I grow more accepting of myself.
I share Dad's sense of humour and of the absurd; watching clips of Dave Allen or early Billy Connolly, I can hear Dad's belly laugh clearly. For the black sheep of a wealthy conservative Belgian hierarchy, he had a fine collection of Irish rebel songs and socialist literature. Quiet time in his study was for poetry and his beloved Gregorian chant. All these things now have their place in my home and in my heart. I fancy that I share his affinity with animals, although I'm a veggie and Dad would always readily tuck into a rare steak like a true blood Belgian. I've most definitely inherited his love of food; the cooking and the eating of it. Chips with real mayonnaise, homemade soups and dark chocolate... possibly not all at the same time, unless it's been a particularly trying day.
My Dad was rather partial to Brigitte Bardot, Bernadette Devlin (McAliskey), Agnetha from Abba, Mother Teresa and Nana Mouskouri: he maintained that Mum was everything he'd looked for in a woman! I now see my Dad as a wonderful blend of Hercule Poirot, Jack Lemon and more than a dash of Desmond Tutu: in fact Dad helped Bishop Tutu improve his French when he stayed in South London; Dad said he was one of the naughtiest adult pupils he'd ever taught; they got on brilliantly. For all my inherent Irishness, my mother's colouring and many of her traits, I see more of Dad in me with each passing year. To Dad, I owe my sense of injustice but also my faith, most of my political leanings and some little eccentricities that even I find amusing. Now that the old family house is long sold, it's probably safe to admit that Dad did all the electrical wiring himself with a book from the library and a lot of expletives; I've just proudly packed a hole in my old lathe and plaster wall with papier mache whilst singing along to Lady Gaga.
I acknowledge all this with delighted surprise and a huge sense of comfort. I've often said that Mum was my anchor and Dad my compass in life. My mother was initially dismayed that I seem to have inherited her own mother's Celtic "spookiness", but it rests easily with Dad's very earthed spirituality. My father's Catholicism was devout but still somewhat customised! As a man who'd wanted to become a monk before he met my mother, he would rattle off letters to The Catholic Herald about the viability of clerical celibacy long before it became "fashionable" to do so. Yet he would still place causes before the saints, taking us on annual family holidays to Our Lady's shrine at Banneux near his hometown of Liege in the hope of curing my sister's chronic bronchitis and later my dreadful short-sightedness. My sister's bronchial troubles did indeed clear up suddenly one year, never to return. For my own part, one of my eyes mysteriously converted to long-sight while the other is still steadfastly near-focused: trying to identify the number of any approaching bus is always a bugger of a job for me.
Whenever I did something beyond her ken, Mum would tut that I was my father's daughter alright: now, I know that she said it with bemusement but also affection. I used to say that I was at that surly, unsure age when Dad died and that he was just getting to know me as person. I felt very robbed. All these years later, I feel I truly know my father; I hope he likes me. The echo of the quiet man is a fine act to follow.
"...in history, where goodness is a rare pearl, he who was good can take precedence over he who was great"
(Victor Hugo)
"Kyrie Eleison" The Benedictine Monks of Santo Domingo de Silos
The late great Dave Allen on Religion
"Mama Never Told Me"  Sister Sledge
"Mama never told me
to look out for the quiet man;
Mama couldn't help herself
'cos my Daddy was a quiet man!"
Posted by Gigi at 6:10:00 am