"If you and I are having a single thought of violence or hatred against anyone in the world at this moment, we are contributing to the wounding of the world."
(Deepak Chopra) 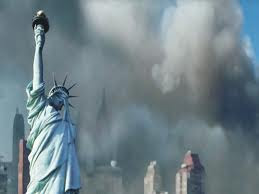 "For me and my family personally, September 11 was a reminder that life is fleeting, impermanent, and uncertain. Therefore, we must make use of every moment and nurture it with affection, tenderness, beauty, creativity, laughter."
(Deepak Chopra)

"9/11" or simply 11th September; whatever your linguistic preferences or indeed whichever side of the dateline you reside, most people who noted the fall of The World Trade Centre's towers and the related attacks will remember where they were when they saw or heard the news. Eleven years ago today, I was working for a well-known international company, based in the heart of the City of London. I would later learn that one of the company's brightest young American executives had been killed at The World Trade Centre. That Tuesday in 2001, I was on a day's annual leave and had been shopping for my mother. When I returned home, I found her standing in front of the TV, watching the reportage of the attack on the first of the Twin Towers.
At first, I thought she'd stumbled on a high-budget US disaster movie, until I saw the looped news stream on the screen. I remember putting the frozen food and the vegetables on the floor and standing with her. Even back then, her health had not been brilliant and she already used a walking stick due to a hip operation and sever arthritis. But we continued to stand in front of the screen, barely ten feet away from the sofa. We watched the second plane crash, at which point I realised I was in tears, my hand over my mouth. Each crash, each explosion, each collapse was accompanied by commentators and onlookers alike screaming: "Oh God! Oh my God!" When Mum finally managed to say something, she pointed at the screen and said: "This is real isn't it? This is the News?"
There are so many poignant and iconic images from that day and the aftermath. I know countless other people will have felt as broken as I did watching people frantically waving and then throwing themselves out of the windows of the burning towerblocks. Some two hundred people are believed to have jumped, most on their own, some in pairs or groups. Some used curtains or tablecloths or even shirts in a vain attempt to parachute against the pace and scale of the fall. The writer Tom Junod later described these poor souls in such horrific free-fall as looking like people trying to swim up a mountain. Their final dilemma haunts me, as a Catholic who believes you should never resort to taking your own life: I am very claustrophobic and my sense of self-preservation is also very strong; I believe I too would have been hoping for the wings of angels.
After 9/11, America's risk and threat landscapes changed. When "The War on Terror" was announced, the implications of that phrase struck fear in my heart again. Obviously, the very name is a contradiction in terms: war is itself both terrible and terrifying. And when the enemy is unspecified or even transient, any conflict can be extensive, indefinite and, like a heat-seeking missile, launched in any direction. We frequently hear that the world's perceptions of terrorism and war changed after 9/11, the day when ordinary civilians in America were targeted in what they might well have called someone else's war, someone else's terror. In the decade following 9/11, some 25,000 people worldwide have died in known terrorist attacks. During this same period, it's estimated that as many as 100,000 Iraqi civilians have died in war torn Iraq. As journalist and political activist Gloria Steinem points out: "From pacifist to terrorist, each person condemns violence, then adds one cherished case in which it may be justified."
I'm increasingly aware of the many conspiracy theories surrounding 9/11; I feel these and any personal views I may have on the subject should never detract from the fact that 60,000 people were injured and nearly 3,000 lost their lives in those few hours on that day in 2001. Throughout today's anniversary in the United States, there were scheduled Moments of Silence to focus on the catalogue of dreadful events, starting at 8.46 a.m. when the North Tower of the WTC was hit, through to 10.28 a.m. when that tower fell, half an hour after the South Tower.
Since 1987, interfaith media organisation "Odyssey Networks" ( odysseynetworks.org ) has been providing America's religious denominations with a platform to share their stories with the public and each other. Last year, to mark the 10th anniversary of 9/11, Odyssey commissioned network member and Franciscan friar Daniel Horan to write a commemorative prayer. I've reproduced part of it here. His emphasis is on reconciliation with our own pasts as well as with others, rather than future retribution. On this day a couple of years ago, I mentioned to a Social Services colleague that I could remember exactly where and how I first saw the breaking news of the carnage. He sneeringly asked me where God had been on that day: God was right there, waiting to be seen. 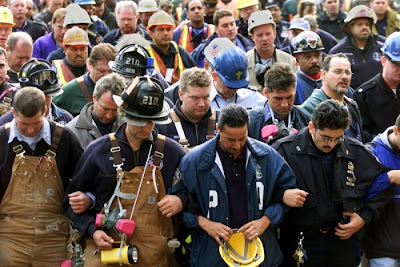 "God of Our Memories: A prayer"
At times Your blessing of memory seems like a curse.
The remembrances we carry weigh us down like burdens
rather than lift our hearts to You.
The tragedies, the violence and the sin of our world threaten our ability
to see Your presence among us,
to experience the breath of life You give us,
to recognise the working of Your spirit in our lives.
We know that what it means to be created in your image and likeness
is to be peacemakers and lovers in our world.
May we indeed be instruments of Your peace,
offering love, pardon. faith, hope, light and joy to the world.
May Your spirit move over the chaos of our memories
and renew the face of our hearts as You continue to renew the face of the Earth.
May our memories, the gift You have given us,
recall ones once called enemies as friends
and call to mind those we have loved and lost
until we share with them the joy of Your presence in the world to come.
Amen.
(Brother Daniel Horan, OFM) 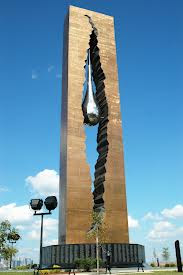