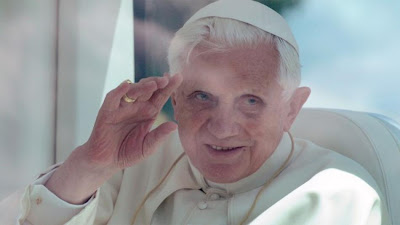 "We are not some casual and meaningless product of evolution. Each of us is the result of a thought of God."
(Pope Benedict XVI)


When Cardinal Joseph Ratzinger was elected Pope in 2005 , he was already seventy eight years of age. Ordained at twenty four, he's now devoted more than sixty years of his life to the disciplines of Holy Orders, the service of the Catholic Church and his fellow men. As Pope Benedict XVI, the 265th Pope has held the helm of the Catholic Church through some very murky waters and challenging navigations over the past eight years.
It's fair to say that he has been a maintainer and caretaker rather than a reformer. Something of a thinking man's Pope, he's an academic and prolific writer. Although he could be described as a conservative theologian (with a small "c"), the Pontiff has initiated many ecumenical dialogues and openly defended the right to freedom of religion. By the end of 2012, he became the first Pope to engage with Twitter! Another first yesterday: it was announced that he would resign the papacy on 28th February this year. He will be the first Pope to resign voluntarily since Celestine V in 1294: Gregory XII was forced to resign in the fifteenth century.

"I am well aware that this ministry, due to its essential spiritual nature, must be carried out not only with words and deeds, but no less with prayer and suffering.
However, in today's world, subject to so many rapid changes and shaken by questions of deep relevance for the life of faith, in order to steer the boat of Saint Peter and proclaim the Gospel, both strength of mind and body are necessary, strength which in the last few months, has deteriorated in me to the extent that I have had to recognise my incapacity to adequately fulfil the ministry entrusted to me."
(Pope Benedict XVI, 11th February 2013) 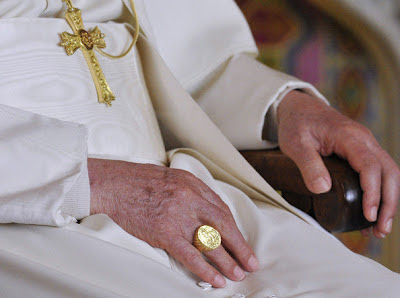 Cardinal Ratzinger had hoped to retire to write after he turned seventy five, the retirement age for bishops. He'd previously submitted his resignation to Pope John Paul II three times but had been refused. In 1991, Cardinal Ratzinger had suffered a hemorrhage and stroke: his eyesight was temporarily affected but he made a full recovery. Never really made public,  this was known by the Vatican Conclave who elected him as Pope. Since his election in 2005, various rumours have circulated about his health: it's known that he suffers from an age-related heart condition and has been prescribed medication for this. He is the oldest person to have been elected Pope since the early eighteenth century, having also been the longest serving cardinal since his namesake Benedict XIII.
Whatever personal issues I may have about developments or perceived responses to them on Pope Benedict's watch, I do feel he's displayed eloquence and fervour whilst conducting himself with an amiable dignity. He's also been uncommonly vocal in expressing the importance of love in our lives, for each other as well as for God. My initial reaction to his resignation was one of shock and then concern that only a serious health worry would cause the Pope to resign before Easter, only days from the beginning of Lent. I pray this isn't the reason and that he simply wants to rest as much as any dedicated gentleman in his eighties deserves to. Certainly the Vatican statement emphasises that the timing of the resignation was intended to avoid the rush of Easter arrangements.
Catholics expect so much from our men of the cloth. I would never dispute that they are indeed devoted and exceptional men, but they are essentially flesh and blood; mortal. The sacred cloth will, I hope, always be renewed, re-embroidered or invisibly mended: hearts, bodies and minds, not so easily. Yet it's become generally accepted and even expected that our Popes will stay in office until they die. In retirement, Pope Benedict will remain a man of God and of conscience; visible, accountable and approachable.
After some adaptations, he'll reside at the monastery "Mater Ecclesiae" in the Vatican Gardens. He'll once again revert to being Cardinal Ratzinger, although his official clerical title may be "Bishop Emeritus of Rome". Shortly after his election to the papacy, he admitted: "At a certain point, I prayed to God 'please don't do this to me'. Evidently, this time He didn't listen to me." Yesterday's resignation sets a somewhat brave precedent; this time, we all listened.
The Catholic Church assures us that the one billion strong global congregation will know the name of their new Pontiff by Easter. I feel it could be immensely healing if the next Pope hailed from Africa; the church has been vociferously accused of ignoring the continuing AIDS epidemic on that continent by refusing to advocate contraception there. I also feel the retiring Pope could be uniquely placed to offer guidance and support to any successor: surely this could only engender continuity and reassurance within and beyond the Vatican for the future?
Amid the shock and apprehension, there's a sense of general sadness among Catholics. As U.S. Archbishop Timothy Dolan admitted: "It's like watching your own Dad get old and admit he's not up to all the duties that being the head of a family involves." But how cool that, aside from tendering less than a month's notice, the Pope also gets to resign in ecclesiastical Latin?  I wish him a peaceful retirement, finally; and I hope he gets to keep the red shoes. 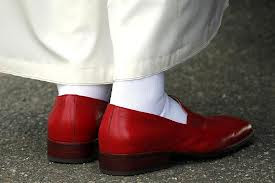 "Love is the only force capable of changing the heart of the human person and of all humanity, by making fruitful the relations between men and women, between rich and poor, between cultures and civilizations."
(Pope Benedict XVI)