"Look at how a single candle can both defy and define the darkness."
(Anne Frank)

"How far that little candle throws his beams! So shines a good deed in a weary world."
(William Shakespeare)


Yesterday was the beautiful, melancholic Christian feast of Candlemas, recalling when Mary was purified and blessed after childbirth, so that she could return to the Temple and present her baby Jesus there for the first time. When Mary and Joseph arrived at the Temple, one of the elders, Simeon, held the baby up spoke of him as the Messiah, "the light". The obvious significance of the feast of candles is that Christ is forever the Light of the World. As well as the church candles being blessed at Candlemas, when I was at school, people brought their own candles to church for blessing; I'm not sure how often this happens these days. Sometimes we all need a little help re-igniting or nurturing that spark of hope or love, to keep it burning through all weathers.
Before the birth of Christ, the pagan Celtic festival of "Imbolc" was celebrated at this time. Imbolc began at sunset on 1st February, itself the celebration of the pagan goddess Brighid, which would eventually become the Christian feast of St Brigid. "Imbolc" translates as "in the belly", referring to a time of renewal and the promise of abundance from the earth goddess. Imbolc marked the halfway point between the darkness of the Winter Solstice in December and the new light of the Spring Equinox in March. Fire played a huge part in the pagan festival; as well as being purifying, it signified the increasing power of the sun as the days lengthened. Christians began celebrating Candlemas as early as the fourth century. It's a bittersweet celebration; looking back to the recent joy and gift wrapping of Christmas, drawing breath before the penitential self denial of Lent. 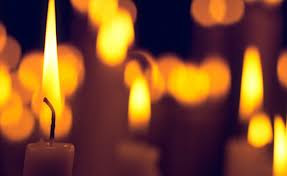 According to folklore, around Candlemas, snowdrops,"Winter's Bells", start blooming and the badger emerges, both heralding the beginning of the end of the cold weather. Sometimes frowned upon by the part of me that's trying to be a proper Catholic, the Irish in me is delighted by "signs". The first snowdrops in my garden are already pushing through the stones and slushy aftermath of winter. I told a friend a couple of days ago that I'd seen a badger snuffling around the undeveloped land at the back of my house; I thought I saw one late last year as well. He wasn't convinced, but yesterday I learned from one of our very own local elders that we have a large, established badger colony in Brighton. I live very close to a convergence of cemeteries and burial grounds: the old boy confirmed that these gruff critters grunt around the grounds at night, probably fueling Brighton's many urban ghost stories. (Personally, inspite of my proximity to the cemeteries, I would be more worried that anything shuffling about in the dark behind my house was an inept burglar: I don't believe the dead can hurt you, much as the living might try). A little digging on t'internet when I got home unearthed (sorry) a short film that Alan Titchmarsh made a couple of years ago, describing Brighton's badgers as "some of the city's oldest inhabitants". I have a feeling that my badger will turn his snout up at my veggie curries and felafel balls, but I'll be watching out for him.
Whether we admit to being superstitious or not, I'd hazard that we all look for signs from time to time: signs that we're doing the right thing, going the right way; signs that we're loved, that our lives have any meaning. Some signs are far more subtle than the obvious neon, flashing or dayglo varieties. I believe we each have our own light to shine; often an illuminating sign to ourselves and others, frequently taken for granted. When you watch children at play, no scenario seems impossible to them; they sparkle because they can and because nobody has yet told them they shouldn't. When we allow our own light to show, we unconsciously give that sign to others to do the same. Not all of us are electrifying: some of us are more like twinkling candles, but one tea-light can set dozens of candelabras blazing. Obviously, I believe that spark is God-given. We should never let anyone try to extinguish our own light: sometimes we feel relegated to the shadows, but the smallest glimmer can guide or define us in the gloom.
During the past week, we've had severe problems with electrical power in my street.: there are now two large holes on opposite sides of a very small road and a very noisy mobile generator appeared to be running the show until Friday. I'm a real sucker for candlelight and have sconces and tea-lights a go-go. I'm largely unphased by the lights going out, although less keen on the prospect of stone cold water and an uncharged laptop. To be honest, part of me (probably that Irish bit again) is a little disappointed that the street wasn't a flickering little settlement of candlelit windows this Candlemas. I decided to refrain from hitting the light switch yesterday afternoon to watch the opening matches of the Six Nations Rugby. Anyone glancing through my front window would've caught me cussing at the referee by candlelight, with the added incentive of the heady scent of ginger and sandalwood. We take electricity for granted on a daily basis, until we're forced to rely on a more basic source of power again and rediscover our childhood wonder for the flame. 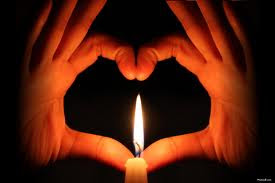 "Thousands of candles can be lighted from a single candle, and the life of the candle will not be shortened. Happiness never decreases by being shared."
(Buddhist proverb)