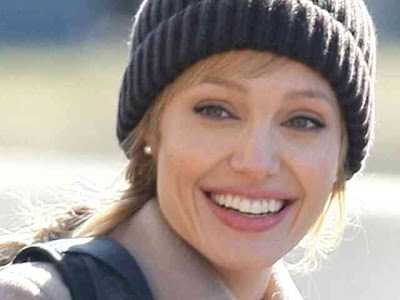 Courage, the force of mind, body and spirit that enables one to face difficulty, pain or danger, has many faces. In line with popular opinion, I've long considered Hollywood actress and celebrity mum Angelina Jolie to be one of this world's most beautiful women. Her face and figure have been globally feted and the fervent interest in her longstanding relationship with idolised actor Brad Pitt has given birth to the generic name "Brangelina". Angelina Jolie is a much publicised mother of a little rainbow tribe. Having adopted three babies from Cambodia, Ethiopia and Vietnam, she's also given birth to three children with Pitt.
Undoubtedly wealthy and often over exposed in many ways, her past holds shadows of depression, drug abuse and self harm. But in 2001, she began visiting refugee camps in regions such as Cambodia, Pakistan and Sierra Leone; she became a Goodwill Ambassador for the United Nations High Commissioner for Refugees that year. More than a decade later, Jolie is now a Special Envoy for the UNHCR, noted for not shying away from war zones.
Widely known for her role as the improbably proportioned and impossibly athletic video game heroine Lara Croft in "Tomb Raider", I've often felt she's an under rated and affecting actress. If you've not yet seen "A Mighty Heart", based on the memoir of murdered journalist Daniel Pearl's widow, I would urge you to watch it. In spite of the documentary style and harrowing truth of it's story, the film is gracious and tender; Jolie's central performance is stripped of vanity.
On 16th February this year, Jolie underwent a preventative double mastectomy, at the age of thirty seven. Having undergone genetic testing due to her family health history, she'd learned that she's inherited a defective BRAC1 gene which hugely increased her chances of developing breast or ovarian cancers.
Jolie's mother, actress and socio-political activist Marcheline Bertrand, died at the age of fifty six after an eight year battle with ovarian cancer, following breast cancer. Bertrand's own mother Lois died at the age of forty five; she had also been diagnosed with ovarian cancer. Jolie's inherited risk of breast cancer before the removal of her breasts was 87%; she still has a 50% chance of developing ovarian cancer and reportedly intends to undergo a preventative oophorectomy, the removal of both ovaries.
In the UK alone, ovarian cancer affects nearly seven thousand women each year; the fifth most common cancer among women. Difficult to recognise due to the vagueness or absence of early symptoms, it's become known as a silent killer. Breast cancer has been the most common cancer in the UK for the past fifteen years, accounting for a third of all cases of cancer among females by 2010. Current statistics show that one in eight of us will be diagnosed with breast cancer.
Jolie went through her three months of treatment and surgical procedures, including reconstructive surgery, discreetly and beyond the glare of the fame monster. She chose not to publicise her dreadful situation and huge decision: not for her the "celebrity diary of a private hell", plastered across entertainment and fashion mags. Instead, she published her own concise and calm piece in The New York Times last week. She encouraged other women with similar histories to make informed choices and highlighted their options. She also stressed that gene testing and preventative treatments should be the right of all women, whatever their background, location or means: the cost of BRAC testing remains largely prohibitive in the United States and unavailable in many other parts of the world.
She's explained that her priority has been her responsibility to her family, her life partner and children: "And they know that I love them and will do anything to be with them as long as I can." Jolie also confirmed that she feels no less of a woman after the surgery; she feels empowered and confident of her femininity.
When I was at school, I was horrified by the story of St Agatha, an early Christian martyr and now the patron saint of breast cancer sufferers and of all martyrs. Persecuted and finally killed for her Christian faith and chastity, her tortures included having both breasts cut off. Even in my skinny, pig-tailed pre-pubescence, I can remember shuddering when reading about this. In recent years, two very different but equally gorgeous female friends have opted to have breast reduction surgery for both health and cosmetic reasons. Hearing of the pain and discomfort they've endured made me thankful that I'm not more generously endowed.
Around ten thousand woman a year in the UK alone now opt to surgically alter or augment their breasts, sometimes to pneumatic proportions, even in the light of the risks of scarring, rupture, toxicity and systemic disease. As breast cancer is now the most common of cancers, breast augmentation has become the most common cosmetic surgery performed in the UK today.
I do believe that beauty shines in the eye of the beholder; if you have an eye to look for beauty, it will surely find you. Angelina Jolie has clearly been blessed by Mother Nature, yet her own genetic make-up may have held something of a curse. I've been very moved by the grace with which she's risen to a such personal challenge with very particular implications for one in the public gaze.
Real grown-up beauty, like courage, truly is more than skin deep. 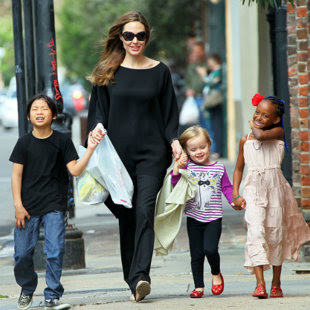 "Life comes with many challenges. The ones that should not scare us are the ones we can take on and take control of."
(Angelina Jolie)