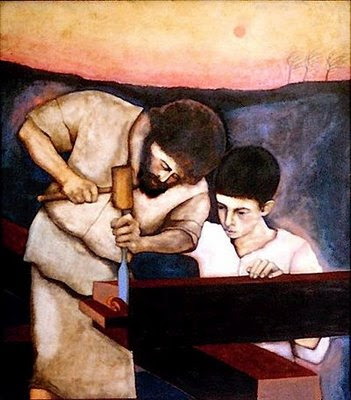 "St Joseph was a just man, a tireless worker, the upright guardian of those entrusted to his care. May he always guard, protect and enlighten families."
(Pope John Paul II)

The celebration of the first day of May has ancient origins. There's an obvious relationship with the Celtic pagan festival of Beltane and also with the Germanic celebration of Walpurgis Night. Although I'm sill unsure how or why the humble St Walpurga, an English missionary who helped to convert pagan Germany in the eighth century, has lent her name to a witches' sabbath. As the western world became Christianised, many popular secular holidays merged with Christian feasts. Through the 20th and 21st centuries, neo-pagans have resurrected and restructured many of the old traditions, including May Day festivities.
As a secular celebration, "May Day" may be best known for maypole dancing and the crowning of the May queen. In pre-Christian Europe, the first day of May was also seen to be the first day of summer, in relation to the midsummer solstice in the second half of June. The Romans celebrated the feast of the goddess Flora at this time, the aptly named queen of flowers and plants. The Roman Catholic Church observes May as the month of the Virgin Mary; with statues of Mary often being adorned with crowns and wreaths of flowers.
May Day has had a tradition of community based festivities across the British Isles down the centuries. Towns and villages celebrated the fertility of the soil and the livestock. Seeding and sowing had usually been completed by this time of year and it would be convenient to allow farm workers and labourers a holiday. For some, May Day gained infamous "communist" associations. As the Catholic calendar was reformed, Pope Pius XII instituted the feast of St Joseph The Worker in 1955. Yet the the saint's patronage of workers and grafters has an older history.
Everything we know about Joseph originates from scripture. We know he was a working man and of limited means. Yet the gospels highlight his lineage from David, the king of Israel. I have a fondness for Joseph because he was very much an ordinary Joe, yet he displayed immense compassion and faith when he realised that his young bride to-be was already with child; supernaturally conceived at that. He initially considered ending their betrothal but feared for Mary's safety if she was shamed as an adulteress.
Clearly, Joseph loved Mary and would also love Jesus as his own, leaving his home and family to protect the child. The gospels note that the people of Nazareth referred to the boy Jesus as "the son of Joseph" without other distinction. Fittingly, Joseph is the patron saint of fathers; also of the Universal Church, of the dying, of social justice, and of course of carpenters.
The Christian Church has always been proud to emphasise Jesus' background as the step-son of a carpenter, probably apprenticed by Joseph himself. The humanity and humility of Jesus through Joseph's guardianship are evident; also the fulfillment and often sheer drudgery that can be part of vocation. Like his father on earth and in heaven, Jesus was a creator. I've always found it poignant that the carpenter's boy would ultimately bear his own wooden cross to be nailed to the Roman tree of execution.
I'm no carpenter, but I've loved working with discarded bits of wood or cut-offs to distress and tart up into driftwood-style shelves, frames and bits and pieces. I'm most fond of my "carpenter's crucifix". I think folk thought I'd finally lost it when I said I wanted to make the corpus out of nails and upholstery tacks, with a crown made of picture wire. A couple of years ago, if anyone had told me I would be thinking of making a crucifix at all, I'd have thought they'd gone large on the altar wine. But it seems to suit the little house; fashioned more from love than skill, as many precious things are. 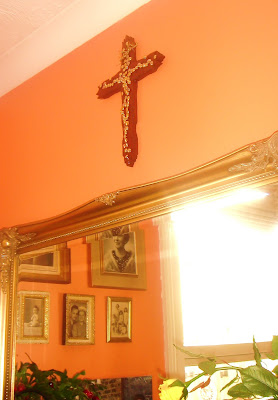 Located a well judged stone's throw away from me is the tall, Gothic Catholic church of St Joseph, at the foot of Elm Grove and just off the Lewes Road. Both roads have long been densely populated: they're areas frequented by locals rather than tourists. In the heart of uni-campus land, much of the Victorian housing is rented out.
In the 1860s, a Mission Chapel stood on the site now occupied by St Joseph's. The current church is a Grade II listed building. However, due to outstanding debts, the church wasn't dedicated until 8th May 1979; a few days after the feast of St Joseph the Worker and a hundred years to the day since building work began.
The Lewes Road and surrounding areas are necessarily entrepreneurial and hand-to-mouth communities. Home to the local branch of The Society of St Vincent de Paul, the church is just a short wander away from one of the SVP's charity shops; traditionally sited in deprived areas. The Brighton shop is as well used as it is well stocked. St Joseph's today serves an increasingly multi-cultural congregation of local workers; those with jobs and those without. 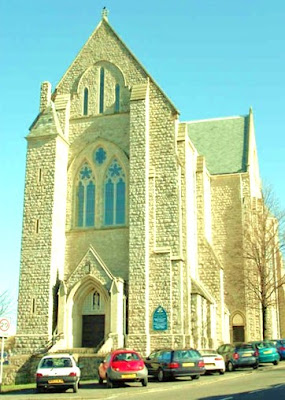 "If I Had a Hammer" The Seekers (version)

"In Joseph, faith is not separated from action."
(Pope Benedict XVI)