"One far fierce hour and sweet": For Palm Sunday 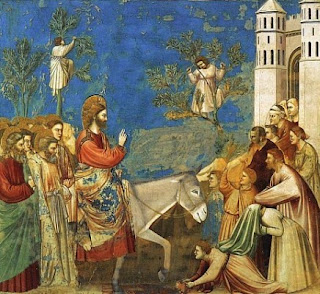 "The Donkey"
(G.K. Chesterton)
When fishes flew and forests walked,
And figs grew upon thorn,
Some moment when the moon was blood,
Then surely I was born.
With monstrous head and sickening cry,
And ears like errant wings,
The devil’s walking parody
Of all four-footed things.
The tattered outlaw of the earth,
Of ancient, crooked will;
Starve, scourge, deride me: I am dumb,
I keep my secret still.
Fools! For I also had my hour;
One far fierce hour and sweet:
There was a shout about my ears,
And palms before my feet. 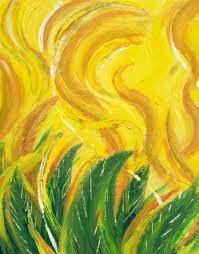 Many people are familiar with G.K. Chesterton's poem, which has become synonymous with Palm Sunday. It's a bitter-sweet poem, capturing the poignancy of Jesus' triumphant entry into Jerusalem, only days before he would be arrested. humiliated and crucified. Some of those throwing palms before him and calling him the Messiah would be among the crowd baying for his blood. I found the poem unsettling when I was in junior school; now, I find it touching and uplifting.
In Eastern tradition, the donkey was an animal of peace, as opposed to the horse, the steed of kings but also an animal associated with battle and war. Jesus' entry to Jerusalem symbolised his entry as the Prince of Peace, not as a war-waging ruler. I wasn't previously aware that in the 16th and 17th centuries, Jack-'o'-lantern type figures made of straw would be ceremoniously burnt on Palm Sunday. The straw effigies represented Judas Iscariot; a revenge for his betrayal of Christ. Centuries before, in pre-Christian times, straw or other foliage figures representing winter were burned to prepare the way for spring: Easter traditionally falls at the spring equinox.
The palm itself was a pre-Christian symbol of victory. The Romans rewarded champions of the games and celebrated military success with palm branches. In Judaism, the palm represents peace and prosperity; in Kabbalah, it becomes the Tree of Life. The Qur'an tells of Mary leaning on a sturdy palm tree in the throes of her childbirth; a voice tells her not to be distressed, that she should shake the tree and fresh dates would drop to sustain her.
Palm trees have been around for a long time: some palm fossils are said to be 80 million years old. Both tropical and evergreen, some trees may live for 100 years; others, like the Talipot palm, wait several years to flower and fruit, then burst into a huge inflorescence, only to die once the fruit has ripened. 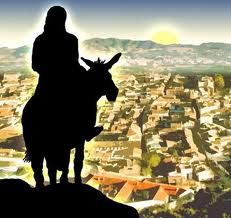 "The Coronation"
( John O’Donohue)
It was a long time ago in another land.
Who could tell how it really was before belief
Came towards you with a hunger that could not see you
Except against white air cleansed of the shadow of earth?
No inkling that you were a free spirit who loved
The danger of seeing the world with an open mind,
How you strove to be faithful to uncertainty
And let nothing unquestioned settle in your heart
You loved to throw caution to the wind when you danced.
To be outside in the dawn before people were,
Letting the blue tides of your dreaming settle ashore.
The village said you put the whole thing into his head.
In the glow of your silence, the heart grows tranquil.
No one will ever know where you had to travel.

For some reason, the folk song "Wild Mountain Thyme", also known as "Will Ye Go Lassie Go", has always been evocative of Easter time for me. Typically, I've been playing and humming it endlessly while I typed this post for Palm Sunday. The song is a reworking by Northern Irish Francis McPeake of a traditional 18th century Scottish ballad. It reminded my Mum of her own mother; now it reminds me of her. Mum's birthday falls around Easter.
The imagery is very verdant, with flower-covered mountains and the scent of summer in the air. Although the tune is mournful, with the hint of loss, the lyrics tell of gathering together to pick wild flowers to celebrate a homecoming. Maybe that's what it is. Barnsley Nightingale Kate Rusby's version is gorgeous; here, it's called "The Blooming Heather".
Have a peaceful Passion Week.
"The Blooming Heather / Wild Mountain Thyme"  Kate Rusby