Catholics: Handmaids of the Lord 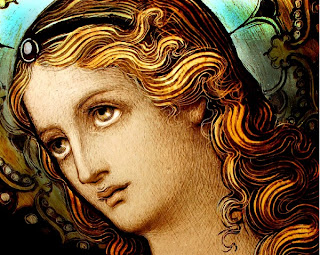 Hmm. I was eager to view the third of Richard Alwyn's films about Catholics last Thursday night, focusing on Catholic women and their role in the church today. I am female after all, cradle-Catholic with a convent school education and I've also become a member of the Catholic Women's League in recent months. I know quite a few Catholic women who are gloriously strong and warm, in their faith and all areas of their lives. Too often, non-Catholic friends of mine (naming no names but mostly male) have poked fun at media perceptions of Catholic birds: repressed and edgy ex-convent types; WI rejects in knitted cloche hats, knitting yet more cloche hats and enthusing about jam; and Mrs Doyle...  Ach go on; we all know the stereotypes. I quite liked the gently inquisitive approach of Alwyn's first film, about priests. I hoped the last of his trilogy would offer insight into the huge role that women play in the Catholic Church, accepted but rarely understood. 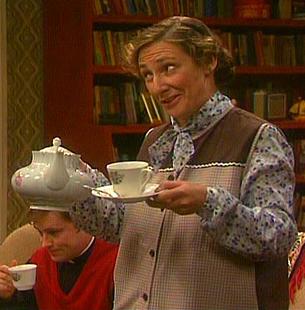 In fact, when I first watched the film last week, I was disappointed. I felt I shouldn't put fingertip to keyboard until I'd put my own expectations away and watched it again. First time round, my impression was that Alwyn had sat back and allowed the participants' insecurities and doubts to the fore, before toying with them. There was an initial feeling that most of the women he interviewed had come to the Catholic Church or revived their faith after disappointment or tragedy in their lives: it filled voids but with what? I was on the point of irritation with Rose, "second-in-command" in administration at Westminster Cathedral. Rose had converted to Catholicism at the age of twenty to enable her marriage; years later, she was divorced and immersing herself in the rituals and machinations of the faith. Yet she hadn't grasped the essential Eucharistic difference between Catholicism and the Church of England, Transubstantiation. Alwyn's questioning seemed quietly smug. I wasn't too sure about her pouring holy water onto the plants either, although they seemed to be thriving at least. She seemed hazy about the corporeal assumption of the Virgin Mary: "Well, she must've died in some respect mustn't she?"  I feared that my pre-occupation with poor, inoffensive Rose clouded my judgement of the rest of the film. Last night, after a sunny day in Brighton and armed with some fig rolls and lemon and ginger tea, I sat down to watch it all again. 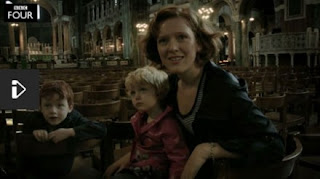 I'm rather glad that I gave the film a second chance. Alwyn had spent a few weeks last summer sitting out around Westminster Cathedral and the visual results are stunning. The Cathedral, Britain's Catholic HQ and the Mother Church, looked gorgeous whether lit or dimmed, empty or bustling. The Cathedral was probably the enigmatic star of the show, which went a long way in explaining why some of the women featured couldn't articulate what the Cathedral meant to them or why they felt drawn to visit, some everyday. The film opened with the assertion that the Catholic Church is famously patriarchal by tradition and definition, yet historically has always had this strong and formidable female presence in the pews and behind the scenes. The Church herself is a "she", traditionally referred to as such.  Alwyn spoke to a female archivist at the Cathedral who referred to Our Lady as the co-redemptrix of the faith. She showed him the plans of the Lady Chapel, explaining that the Catholic acknowledgement and devotion to the Mother of God distinguishes the faith from other Christian churches. She saw Mary's unswerving acceptance that she would bear the Son of God as strong feminine capability rather than passivity or even submission, as suggested by Alwyn.
Jenny on the Information Desk seemed to have had the archetypal claustrophobic experience at her convent school in the 1940s and 50s. She spoke about the warnings to "stay pure to stay Catholic", of indoctrination and blind faith. She even suggested that some girls at that time may have married as soon as they could simply to have sex. Fortunately, I don't have similar memories of my convent school years. Yet this lady was still with the Catholic Church, still drawing some support from it; even planning a trip to Lourdes.
There was a doctor who said she couldn't reconcile her experience and knowledge with the attitude of the church on contraception and the management of AIDS in Africa. Yet she valued the moral grounding she attributed to her Catholicism: of doing to others as you would have them do to you. Sitting on the steps of the Cathedral on a sunny afternoon as tourists and office workers stepped in and out around her, she spoke of her Catholicism making sense of the chaos. There was the elderly recovering stroke victim who planned to come to Westminster from Harrow everyday, now that she had more confidence to travel. She said she had been in palaces and remained unphased by the grandeur and opulence, yet the beauty and love she experienced in the Cathedral moved her to tears. Having lapsed as a young girl, she had notched up 60 years of hedonism, largely in the fashion business. She felt no guilt at the time of her excesses, but no unconditional happiness either. She felt guilt now, but described the seven months since returning to the church as "glorious". Her face was a picture of serenity and unexpected joy; I felt her revival of faith was essential to her ongoing physical recovery.
My impatience with Rose the first time round prevented me from fully appreciating the enthusiasm of two younger women, included early in the film. The young mum with her two toddlers attended mass at her local - the Cathedral - every Sunday and would attend every day if her schedule allowed. She was unabashed about her love for the Catholic Church, describing herself as having "Catholic bones". She announced cheerfully that she went to mass regularly because she really enjoyed it. Also the blonde former Buddhist, sat cross-legged on the Cathedral steps, who smiled shyly as she spoke about her conversion: she'd wanted to be a Catholic because of the beauty and sense she found in the Eucharist.
And what of Rose? I felt I'd been dismissive of Rose; although I do believe that the film-maker had exposed a lack of formal instruction and exploited both her eagerness to please and her discomfort with such attention. Rose clearly loves the Catholic Church: it fulfils her to offer her time and support; ultimately, why should I look for further validity or motive for focusing on her in this film? I began to find her stoic affection for the Cathedral and her priests infectious: she talked of priests on holiday who turned up to concelebrate with "nothing with 'em; no alb, nothing!"  I would have welcomed the inclusion of one or two women who had remained in strong Catholic marriages and had chosen to send their daughters to convent school because of happy memories. And teenage girls themselves, perhaps in the midst of a Catholic education. And nuns? I would certainly like to have seen the odd visiting member of the Catholic Women's League - and we're actually not that odd, by the way. I think I was initially disappointed because the film seemed to lack female dynamism; I do believe that women are a force to be reckoned with within the Catholic Church. I understand why the church will never ordain women: it certainly doesn't follow that women are forever disdained by the Mother Church. 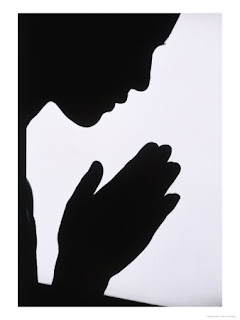