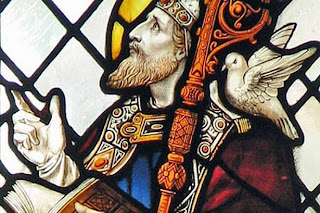 "Do good and then do it again"  (Welsh proverb)
St David, patron saint of Wales, is said to have died on 1st March, 589, and the date has traditionally become his feast day. However, it wasn't until the eighteenth century that St David's Day was declared a national day of celebration in Wales. Ostensibly, surprisingly little is known about him, although his birth and existence are historically verified. As a child, I simply associated him with daffodils and my favourite auntie, Barbara, who's birthday was 1st March! Over the years, I often saw St David depicted standing on a hill, holding a dove or a leek: more of which later. In fact, Dewi Sant, as he's known in Wales, was born into an aristocratic family in West Wales. His father was a prince called Sant, son of the King of Cardigan; his mother Non was a chieftain's daughter and possibly a niece of King Arthur. His mother was a devout lady who became St Non; his beloved teacher would also be canonised as St Paulinus.
St David helped to spread Christianity among the pagan Celtic tribes of Western Britain. He originally founded a large monastery in West Wales and eventually rose to be Archbishop for the Welsh nation, but chose to remain with his community at Menevia. This region has been renamed St Davids; his shrine there became a place of great pilgrimage. There is a legend that tells of the saint preaching to huge crowds where many were unable to see him: the ground is said to have risen up until St David was standing on a hillock, for all to see and hear. When you start to scratch around, there are many such legends of St David, even surrounding the circumstances of his birth. St Patrick is said to have been prepared for St David's birth 30 years before, having been visited by an angel who foretold his rise to greatness.
Baby David's baptism water is said to have cured a man's blindness. Sadly, the child wasn't the blessing of a love-filled marriage. He was born after his father had seduced Non, who ran away to give birth alone by the seashore. Legend has it that her labour was so intense that she grasped at the rocks, leaving marks to this day; a lightning bolt then split the rocks apart. Unfortunately, no-one seems quite sure which marks on which rocks bear witness to St David's dramatic but lonely birth. It is known that his mother Non decided to become a nun while her son was still a child.
The young David was schooled at the local monastery, Hen Fynyw, near to present day Aberaeron, and was taught by the blind monk Paulinus. He's said to have cured his teacher of his blindness by making the sign of the cross over his face. Recognising the boy's holiness, Paulinus sent him forth as a missionary across still-pagan Britain. 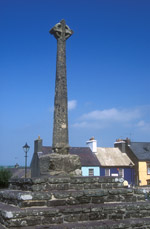 In the course of his travels, St David founded twelve monasteries. He prescribed a life of austerity for himself and his monks, which made him unpopular at times. Again, legend tells that some of his own monks were so disgruntled that they attempted to poison his bread. However, St Scuthyn travelled from Ireland on the back of a sea-monster (remember this was long, long before P and O ferries) to warn him. St David blessed the poisoned bread, ate it; and was unharmed.
His monks certainly worked hard, rising at dawn and working the land as well as in the monasteries. They ploughed the fields themselves, as he wouldn't allow them to make animals work for them: he believed that each man should be his own ox. As they worked, they continued to pray, but there lives were committed to silence. The monks ate only vegetables and bread, drinking milk and water. St David himself had lived on vegetables and herbs for many years and would do so until he died: hence the depiction of the saint with the leek, national emblem of Wales and also of growth and harvest. His meagre vegetarian diet did little to stunt his growth: legend holds that he was physically tall and strong, living over 100 years. It is generally accepted that he died in 589 in his monastery at St Davids, where he's buried. The Cathedral of St David would later be built there. 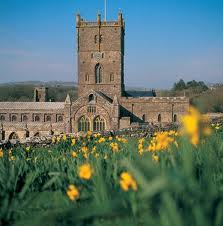 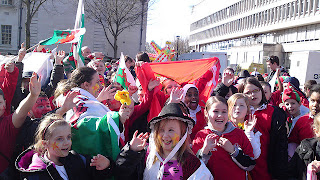 However austere his teachings, he was obviously a charismatic man who became known as a prophet and worker of miracles; he shaped the spirituality of his people, time and place. His popular depiction with a dove symbolises the eloquence of the Holy Spirit as he preached Christianity. His much celebrated last words to his monks are beautifully simplistic, also resonating in the modern world: "Be joyful, and keep your faith and your creed. Do the little things that you have seen me do and heard about". Today, "Do the little things" ("Gwnewch y pethau bychain") is a well-known and much used phrase in Welsh, and an inspiration to many.
Dewi Sant was canonised in 1120 by Pope Callactus, when 1st March was included in the Church Calendar. His feast has become a time of celebration and partying in Wales. In St David's Hall, Cardiff, there is an annual concert featuring male voice choirs from across the world. Throughout Wales, parades and often food festivals take place. Despite the fact that the saint himself abstained from drinking and advised others to do the same, a number of Welsh breweries make special St. David’s Day ales. Likewise, a Welsh stew, Cawl, containing both lamb and leeks, is traditionally consumed on St. David’s Day. Ah well. In honour of the great man's vegetarianism, I include a recipe for more celebratory comfort food: 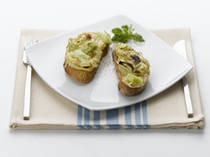 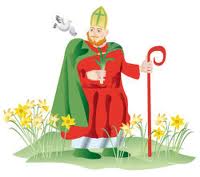