"I love cats because I enjoy my home; and little by little they become it's visible soul."
(Jean Cocteau) 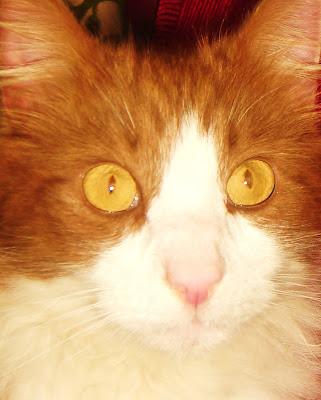 A couple of pictures of a very stoical Ginger, the tom-from-next-door, especially for Annie, who wanted to know more about him. Immediately, I have to say Ginger is not "my cat": he very much belongs to the family who live next door to me and simply visits, but he's a much-loved visitor. I don't think my neighbour will mind me featuring her cat in the blog: he lounged about like a professional diva for his photo shoot,  breaking his pose only to attack my bootlace or clean something unspeakable from his tail.

Ginger is a long, big-pawed, big-haired cat who's terrified of hoovers, Kings of Leon and other loud noises. He's slightly cross-eyed and also veers from extreme clumsiness to utter slinkiness. He insists on leaping onto the sloped roof of my old lean-to shed, only to slide off it in slow motion every time, with an air of gritted nonchalance. In spite of his size, he has the most pitifully tiny meow. Unfortunately for my feathered friends, he's actually a fearsome and prolific hunter. However, he still likes a little hot water in his milk at this time of year, just to take the chill off things.
A total drama-queen, if there's a hole somewhere, Ginger will drop down it; a large puddle and he'll fall into it. He's scared of spiders and even tomato stalks or my grass plant cuttings that vaguely resemble spiders. My neighbour says he loves king prawns but he'd clearly be meowing up the wrong hibiscus to think he'd get such fare from me. He does get a nice dollop of soft cheese with his fishy cat biscuits. I have given him veggie pate which he smacks away at without knowing the difference. He developed a taste for fruity fromage frats after sticking his whiskers into a bowl when I wasn't watching his every big-footed move; but he'll only eat strawberry flavoured.
He likes to sit on the stairs and watch bemusedly as I potter about; at least once a week he'll poke his head through the banisters and have to be eased out of them. He's a frequent companion as I type this blog early in the morning or late at night: if blogger's block sets in or I start to droop, Ginger has been known to sit on the laptop; enough to make any hard-drive crash.
Shortly after I moved here, Ginger disappeared. After four days of searching and calling, my neighbour despaired that he must be dead. I felt sure that he was alive and very near, but in serious trouble. On the fourth night, I walked down to the disused warehouses at the end of the road, padlocked off from the street and due for demolition. I called him for nearly an hour until I heard the faintest, weakest little mew. I fetched my neighbour and at two in the morning, some very amused firemen arrived and broke into the rusty upper floor of the warehouse. A terrified Ginger sprang out into the dark, only emerging at my backdoor as dawn was breaking. He'd been stuck in a compartment furthest away from the street, apparently surviving on pools of rainwater. He'd obviously gotten himself in but a door had closed shut behind him. Like me, he still has a penchant for climbing; like me, he can't always get back down.
I think we bonded after his little escapade. He was very jumpy for a few months afterwards and lost a lot of his bushy tail, now grown back even fluffier. He was a wonderful companion while I had pleurisy recently, purring patiently and following from room to room while I was housebound. He purrs almost constantly; I talk to him a lot while he's here and it's occurred to me that he may actually be groaning.
He's extremely loyal, following my neighbour around the corner to the convenience store and waiting patiently for her outside; thankfully never showing any interest in the relentlessly busy main road. The other day, he arrived at my front door carrying a bedraggled piece of blue ribbon which he proudly dropped on my doormat; regrettably, his more usual offerings are freshly caught and less easily disposable.
I try not to let him sleep here: he isn't mine, at the end of the day. He comes in for his biscuits, some milk, a grooming, forty winks in his favourite spot in the hall (under the radiator) and a bit of a chat. When my neighbour and her family moved to this street some seven years ago, Ginger had apparently been left by previous residents. Maybe he moved away with them and found his way back here: who could leave such a wonderful animal behind? My neighbour took him in and called him "Ginger" because that's essentially what he is. She tells me he was already fully grown and I realise he may be getting on a bit now. I'm trying not to think about that.
When my own very beautiful, slightly quirky little cat died some years ago, I couldn't bear to replace her and still feel she's irreplaceable. I told myself I would welcome a cat if it adopted me, which is what my Sooty did. She arrived in my life when she was about three months old and died with her head on my lap, some fourteen years later. My belief is that God brings people, animals and places into our lives for a reason. I think Ginger simply appreciated that I was a cat-person-without-cat and decided to take me in paw.
When he started visiting me, he didn't know what to do with the cat toys I bought for him. I've spent several exhilarating if exhausting evenings, throwing catnip mice and balls with bells up and down the stairs and retrieving them myself. Ginger usually simply watches until I collapse on the sofa, when his work here is done, One of us is clearly eccentric; I'm pretty sure he feels it's not him.


Hi to Annie-the-Pagan and also to Christine and Colin, who care about all creatures (including Gigis). 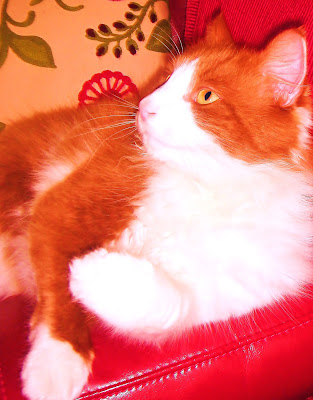 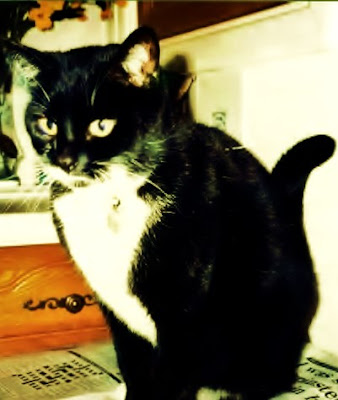 "Hmm. Ginger you say? Really?" My own irreplaceable Sooty Poshpaws

"What greater gift than the love of a cat."
(Charles Dickens)

"Of all God's creatures, there is only one that cannot be made slave of the leash. That one is the cat. If man could be crossed with the cat it would improve the man, but it would deteriorate the cat."
(Mark Twain)