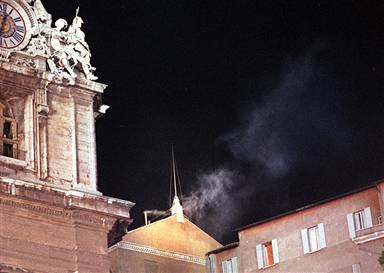 White smoke from the chimney at the Sistine chapel in Rome about three hours ago signified to the world's one billion plus Catholics that we have a new Pope. I'm so glad to see the Conclave decide relatively quickly: this feels definitive and positive; reassuring in the face of the recent divisions within the Church and derision from without.

Cardinal Jorge Mario Bergoglio, from Argentina, is the 266th Pope: the first Latin American pontiff; the first non-European to be elected in over a thousand years, the first Jesuit Pope, the first Pope Francis.
His initial address to the euphoric crowds was confident but humble: it also felt very personal and indicative of the man. He not only gave the traditional blessing but asked the people to pray with him and for him and for Benedict, the Pope Emeritus. I found this very touching. He likened his election to being "fetched" from the very edge of the world. Around forty two percent of the planet's Catholics are from Latin America, although Catholics have notably been leaving the faith in that region in recent years. It seems significant that our new Pope hails from the developing world.
As a Jesuit, the former Cardinal Bergoglia will be used to looking after himself and living a no-frills existence. He's a Vatican diplomat but is not a university professor type. Regarded as an exceptionally spiritual man, he rides the bus in Buenos Aires from his simple apartment where he cooks and fends for himself, eschewing the more luxurious accommodation and private limousine afforded to cardinals. Of course, this simple life will necessarily change now: hopefully the man will not.

Known to many in Buenos Aires as "Father Jorge" as he visits the poor, he's created new parishes and restructured administration; no mean feat itself in bureaucracy riddled Argentina. A man of quiet but firm voice, he's been outspoken on many issues, including same sex marriage. In 2010, when Argentina became the first Latin American country to legalise marriage between same sex couples, Father Jorge actively encouraged the clergy and the people alike to continue to protest.
At seventy six years of age, he is perhaps an older new Pope than many of us expected. He was actually the runner-up of the last Conclave in 2005, with the second highest number of votes in all four ballots at that time. He became Archbishop of Buenos Aires in 1998: his role there has often involved speaking publicly about economic and social distress. Although not overtly political, he hasn't hidden the social and political impact of the Gospel in a large country rocked by economic crisis and with a history of social injustice. He studied Liberal Arts in Chile and has a degree in philosophy and a master's in chemistry. In 1973 he was elected Superior of the Jesuit Province of Argentina.
The Jesuits are traditionally "God's Marines": an evangelical, apostolic ministry which today spans more than a hundred countries across six continents. Spanish-born missionary St Francis Xavier was one of seven men along with founder St Ignatius Loyola who pioneered the Jesuit way. In 1534, they professed their vows of poverty and chastity and a special vow of devotion to the Pope. The new pontiff's break with tradition in choosing to become the first Pope Francis may reflect this Jesuit background. Alternatively, he may have chosen the name in honour of St Francis De Sales, the mystic and educator; or of course St Francis of Assisi,  the gentle patron of animals and the environment. What has become clear is that this Pope is a grounded man of humility and a pastor at heart: truly what the Catholic Church has called for at this time. 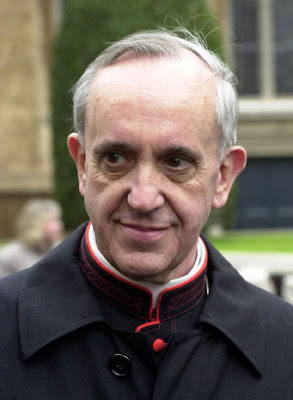