"Above all, be the heroine of your life, not the victim."
(Nora Ephron) 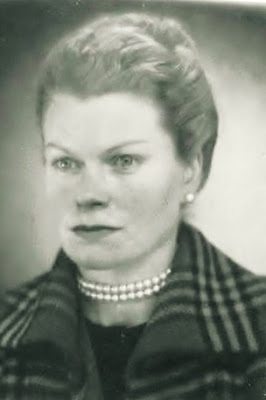 Mum before she married.

I was quite distressed today when my sister told me my Mother's Day card for Mum hadn't arrived in Hampshire. This will be our third Mothering Sunday without her. It may seem silly to send a card to be placed at your Mum's grave, but I've always sent her one; don't think I ever missed a year. Like her, I'm big on cards, giving as well as receiving. You can often write out what sticks in the throat and crushes the heart and the written word is a memorable testament to a feeling. Hopefully, my card will arrive on Monday.
I've been thinking I should post a little testament to my Mum as the beautiful, funny, vibrant woman that she was. Mum had a strong femininity that wrapped itself around her motherhood like a Harris Tweed cloak; reassuringly abrasive, irrefutably warm and seemingly indestructible. The photos here span most of Mum's adult life as a wife, mother and early widow, but she herself never stopped being her mother's daughter.

I never knew Granny Barbara, but Mum talked about her a lot. Like Mum, she was a petite and coquettish woman who loved things with bows and trims, in spite of her harsh and sparse upbringing. A Glaswegian Presbyterian by birth, she left her clan to marry my grandfather; by all accounts a surly Norn Irish Catholic widower, a farmer with no land of his own.
Barbara was initially ostracised by the other Catholic women in their part of rural Antrim. They threw eggs at her front door and refused to sit with her in church: very Christian. She won them over with a gentle nature that belied her resilience; and with her gift for "knowing": they would come to her to reveal their fortunes apparently; also, not strictly Christian! She must have said something right because the egg throwing stopped and she was embraced by the women and the parish.
Mum's feistiness seems to have been inherited from her father; her quiet determination from her mother. She often referred to her as "poor Mum", but Granny was rich in the admiration and respect she invoked in her own four daughters. There was a fifth, youngest child, a son called William; also his mother's boy, to the anxiety of his father. My grandfather was a commanding but demanding man. Barbara bore her son when she was fifty, which may seem an unthinkable age, but she was by then very much a Catholic Mother.
Her health deteriorated after her last pregnancy, although she lived to see her girls bear their own children in England before she eventually succumbed to cancer. She encouraged all her children to fly the nest and make something of themselves, even though at the time this essentially meant leaving Antrim and leaving her on her own with a weary but volatile husband. She eventually came to England in her final illness: my Dad helped to nurse her. Practically disinherited by his own family in Belgium, she became a mum to him too.
My Mum often grieved that my sister and I are childless; for me, it hasn't been a choice and it's my one big regret in life. I like nurturing creatures: it feels empowering rather than compromising.  I often say that I felt orphaned when Mum followed my Dad two and a half years ago, but I will never feel motherless, whichever day my card is delivered.

It's funny how the circles turn: Mum always said that Granny loved the song "Que Sera, Sera" and would sing it while she did the family laundry. Mum loved it too; I look at photos of her before she became my mother and she reminds me of Doris Day, who I find adorable. The song features in the old Hitchcock film "The Man Who Knew Too Much", also starring my Jimmy Stewart. Somewhere I have the film on DVD; I warble this now, sometimes when hoovering. I hope I've inherited much from some strong minded, big hearted little women; I hope I don't waste it. What will be, will be. 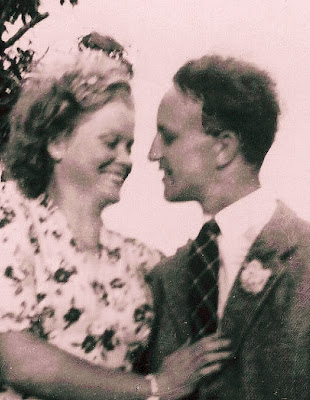 When Tony and Josie got married... 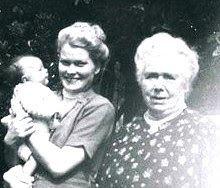 Mum with her own mother, my Scots-Irish Granny, and with her first baby; my sister. 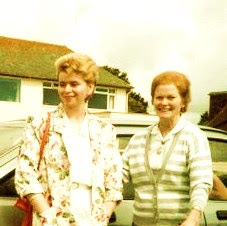 With me when I was about eighteen years old. Please ignore floral jacket. 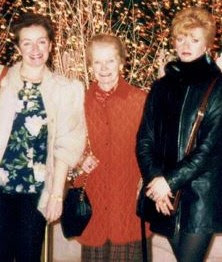 Mum in Paris with me and my sister, the year Princess Diana was killed there. Mum's in her favorite shade of red; my sister appears to be wearing a deceased animal with shoulder pads. I am honestly wearing a skirt, albeit a very short one, and black nail polish; Jesus, Mary and Joseph. 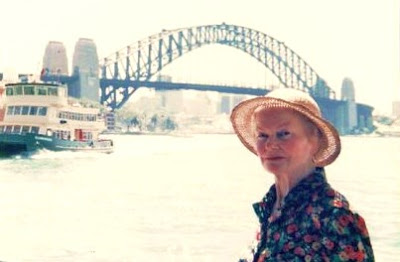 Mum went to Australia in her later years, when her health was already failing and she depended on a walking stick; she loved it there, later encouraging me to go and fall in love with the continent too. 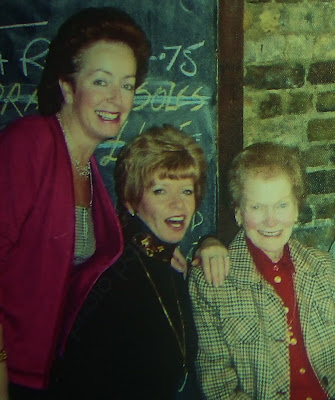 My sister and I with Mum on her birthday, nine years ago. 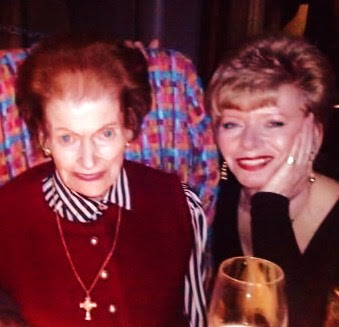 This is one of the last photos taken of Mum, a few months before she died. It was taken on my birthday, almost exactly three years ago. Already very frail and ill here, she died little more than six months later.

"What would men be without women? Scarce, sir...mighty scarce."
(Mark Twain)

"I am a woman; my country is the whole world."
(Virginia Woolf)