Boys will be men 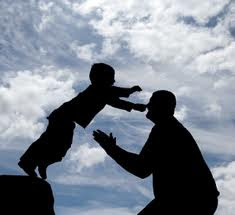 "When I was a boy of fourteen, my father was so ignorant I could hardly stand to have the old man around. But when I got to be twenty-one, I was astonished at how much he had learned in seven years."
(Mark Twain)

Yesterday was Father's Day. With every passing year, my Dad becomes ever more the yardstick that any man who should come into my life in the future will be held up to. With every passing year, he has also become the mirror I hold up to myself.
Father's Day was originally inaugurated in the United States early in the twentieth century to compliment the celebration of Mother's Day. Most probably founded in 1910 in Washington by Ms Sonora Smart-Dodd, a member of the Christian Women's Temperance Society. She had told her pastor that fathers should be honoured as well as mothers; her own father, a veteran of the Civil War, was a widower who had raised his six children on his own.
The first celebration was on 19th June that year; Sonora's father's birthday was a couple of weeks earlier. Initially, public acknowledgement was vague and variable; Americans resisted the innovation for some decades, viewing it as a mainly commercial venture. Finally, after two failed lobbies, President Johnson issued a presidential proclamation in 1966, designating the third Sunday in June as Father's Day. As recently as 1972 , Richard Nixon passed it into law as a public holiday in the States, finally following the annual celebration of motherhood.
On a recent visit to the doctor's surgery, I realised I had interrupted quite a busy antenatal clinic. I'm accustomed to seeing very young mums-to-be in Brighton; often with one or two other small children already attached. In a city with such severe housing problems, seasonal employment and a burgeoning younger population, you often note the pattern of four year gaps between pregnancies. A "career mother" may necessarily escape the often demoralising job-search and fortnightly interrogations at the local benefits office. I asked my friend's little girl what she wanted to do when she left school and this bright and confident child promptly told me she wanted to have her first child at eighteen and a sister or brother at around twenty two. But I readily admit that I know very young and very devoted single mums, who love their kids obviously and unconditionally and who appreciate that parenting is both as tough and as good as it gets. But what of the young fathers?
Sat opposite me at the surgery was a young, skinny boy of seventeen, flanked by his seriously pregnant girlfriend, two years older, and by her mother; seemingly three feet taller and broader than both of them. His trainer laces were undone and his coach's cap was back to front. Both of these affectations appeared to be deliberate, unlike his presence at a prenatal clinic. He looked terrified.
The granny-to-be glared at me as I made conversation with the couple. I asked him if he was looking forward to being a dad: he shrugged and muttered that he didn't even know his own father yet. This nearly broke my heart but earned him a threatening scowl from uber-gran. She told me being a father was a "piece of p***"; that her own kids had three different dads and she'd managed without hearing from any of them. The lad shuddered, as if he too was wondering if she'd disposed of a stream of baby-fathers.
I disagree with her utterly: it's true that a boy can easily father a child, but it takes a man to become a dad. We pressurise our boys to man-up even though this often encourages eternal laddishness. We smile indulgently as little Mikey struts around after his big brothers with his water-gun in the park but tut unsympathetically and from a distance when an older but not wiser Mick confuses assertion and aggression at the football pitch. Is it any wonder that many teenage boys prefer to steer clear of the minefield of open emotions, theirs or anyone else's?
While society may not actively encourage boys to be promiscuous, the sowing of the male oats can still be seen as an unspoken rite of passage. Determinedly chaste at twenty five, I was considered a scared, silly or at worst frigid female. One of my dearest friends around then, a confident and funny gay man who was a virgin in his early twenties, was simply seen as some kind of freak. Pressurised into sex with his first boyfriend, he was diagnosed with AIDS at the age of twenty three.
Traditionally, little girls are not dissuaded from developing nurturing skills from an early age. Generally, I don't believe we wholeheartedly prepare little boys to expect and embrace fatherhood: toys, games and the media are still very gender-centric.
The lad at the surgery told me he'd not really ever thought about being a father and had known his girlfriend three months before she fell pregnant. He looked as though he was being punished, although the girl and her mother professed themselves to be over-joyed at the news. His possible mum-in-law-to-be nudged him and said at least he was "in working order" and that the hardest part was over for him. I wanted to tell him that actually being a father could be the biggest, bravest, brightest part of him. I wish I had: I wish someone had told him long before he was pulled into an antenatal clinic with his laces undone and feeling that his future was all stitched up against him.

"By the time a man realises that maybe his father was right, he usually has a son who thinks he's wrong."
(Charles Wadsworth) 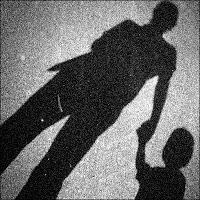 "For a New Father"
(John O'Donohue)
As the shimmer of dawn transforms the night
Into a blush of color futured with delight,
The eyes of your new child awaken in you
A brightness that surprises your life.
Since the first stir of its secret becoming,
The echo of your child has lived inside you,
Strengthening through all its night of forming
Into a sure pulse of fostering music.
How quietly and gently that embryo-echo
Can womb in the bone of a man
And foster across the distance to the mother
A shadow-shelter around this fragile voyage.
Now as you behold your infant, you know
That this child has come from you and to you;
You feel the full force of a father' desire
To protect and shelter.
Perhaps for the first time
There awakens in you
A sense of your own mortality.
May your heart rest in the grace of the gift
And you sense how you have been called
Inside the dream of this new destiny.
May you be gentle and loving,
Clear and sure.
May you trust in the unseen providence
That has chosen you all to be a family.
May you stand sure on your ground
And know that every grace you need
Will unfold before you
Like all the mornings of your life 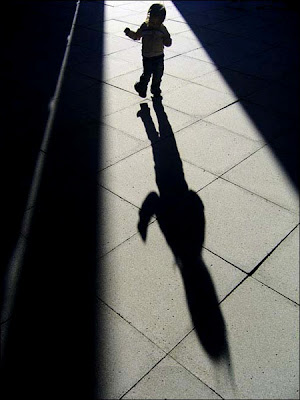 "This is my most important role. If I fail at this, I fail at everything."
(Actor Mark Wahlberg)

"It doesn't matter who my father was; it matters who I remember he was."
(Anne Sexton)