Each time you blink 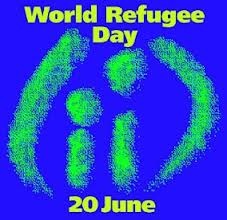 "While every refugee's story is different and their anguish personal, they all share a common thread of uncommon courage: the courage not only to survive, but to persevere and rebuild their shattered lives."
( Antonio Guterres, United Nations Refugee Agency)

Yesterday was World Refugee Day; very tellingly, I forgot about it, as many did. It took the often stunning but exhausting Russell Brand on last night's Question Time panel to remind me, and the audience. So often in these economically depressed times, the word is "Refugee" and yet we hear "Immigration"; and we feel the boundary.
A United Nations report issued this week confirms starkly that that we’re experiencing the worst refugee crisis in nearly two decades. Nearly 50 million are currently displaced from their homes due to conflict or violence. This is the highest number since 1994, when millions of people fled "ethnic cleansing" and genocide in former Yugoslavia and Rwanda.
The majority of today's refugees are originally from Afghanistan, Iraq, Somalia, Sudan and Syria. Beyond any scaremonger sloganeering from any political corner or hole, it may surprise many in the U.K. that the countries that historically have most opened their borders to refugees remain constant: Pakistan, wracked by its own crises; followed by Iran, Germany and Kenya. Turkey has joined the "top ten" list after giving refuge to an influx of Syrians, displaced by or fleeing the civil war.
The United Nations estimates that the war in Syria, now in it's third year, has forced 1.6 million Syrians into neighbouring Jordan, Lebanon and Turkey. They flee from a conflict which has so far killed nearly 100,000 people, crushed their homes, schools and businesses and denied their identity. They do not leave by any choice other than the will to survive and to see their children live. It's the same spirit which gets you and I out of bed in the morning, scratching and groaning, to grab breakfast and get the bus to work; minus the job, the bus, the breakfast and the home: insert fear and hunger instead. Later this year, the number of refugees from Syria alone will reach 3 million. For those of you who don't find the Bible believable or relevant to modern living, there are situations of epic displacement, persecution and exodus across the world right now.
As this summer solstice dawned, as with each new day, another 23,000 people began their own search for safety or refuge from persecution. Few borders are geographical rather than manmade; worldwide problems don't stop at checkpoints. Charity certainly should begin at home but the outside world which essentially houses all of us, does not begin or end at your own doorstep. Our world has a newly internally displaced person every four seconds. As Antonio Guterres, chief of the U.N.'s Refugee Agency says: "Each time you blink, another person is forced to flee," 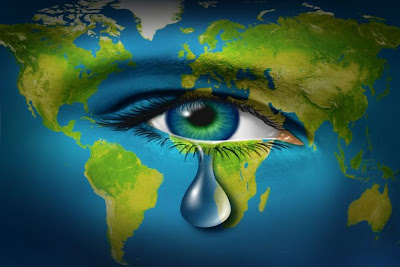 "On World Refugee Day, I call on the international community to intensify efforts to prevent and resolve conflicts, and to help achieve peace and security so that families can be reunited and refugees can return home."
(Ban Ki-moon, U.N. Secretary-General)

"In my experience, going home is the deepest wish of most refugees."
(Angelina Jolie, U.N. Envoy)