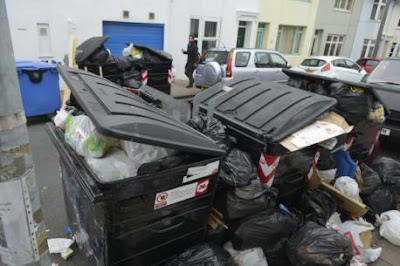 The photo above is from a another side-turning off the main road here in Brighton, very close to my own little street. We are set off one of the busiest thoroughfares for local business in the city; within easy walking distance of the Palace Pier, the Pavilion and the Brighton Wheel. Not that this makes any difference to the immediate scenery: there are similar mounds of household and commercial rubbish and recycling across Brighton and Hove.
This post is really an open letter to Brighton and Hove City Council; the content has been emailed to them. Our refuse and recycling teams have been on balloted strike, as we approach the most crucial time of the year for seaside establishments. A wildcat strike in May resulted in a backlog of rubbish that couldn't possibly be cleared before the work to rule and current strikes commenced. In my particular area, our wheelie bins were removed just before the strike started, as part of a pilot scheme for communal bins. I would have welcomed this move, having rented in an area with only communal bins when I first moved here. But they were emptied everyday. When such large, focal collection points are left uncleared, the results can be seen in these pictures. Talks with the unions started in February; surely the pilot scheme should have been postponed if there was even the threat of disruption to services? The council initially suggested we take our rubbish home, but they had no (printable) suggestion as to where we should now put it.
The road cleaners have been part of the strike. Brighton's famously prolific gull population, who must think Christmas and Armageddon have arrived all at once, are skilled and ruthless binbag-rippers. Our pavements have been strewn with bits of pizza, fish and chips, vegetable skins and leftovers, much of it beginning to rot. Some bags clearly contain disposable nappies and sanitary items; also the dog poo the council has trained it's residents to scoop and wrap up. We have a wily and determined fox population too, and we've been warned that infestations of rats and maggots could follow.
Most people in Brighton are thankful that June has so far not been "flaming": probably one of the few parts of these isles that would rather forgo a long hot summer than suffer the accompanying long hot smells. However, the council and police warned residents about other flames: an arson attack would be disastrous with rubbish piled so high in front of houses and shops. The newly placed communal bins were meant to be strategic for flats and multi-resident housing, bus stops and food outlets.
Most of us have only a vague idea about the background to the strike. We know that the workers are concerned that changes to council staff allowances could effectively result in average pay cuts of £4,000 a year. The council say this is unlikely and that any changes have been brought in to safeguard existing jobs. But this is not a "poor" council: Brighton and Hove increased our council tax by just below the government capped maximum this year; the same as the previous year.
Sympathy for the working man and woman has been stretched as summer in the city so far has being uncomfortable for residents and visitors alike. Yet recent media polls showed that more than half of all residents questioned felt the council must be at fault. The strikers have not being paid and their families are living, eating and playing next to the same piles of rubbish as the rest of us. The council seemed to be in continual talks with the unions but at perpetual standoff. It didn't help the council's case that their representatives claimed things were moving encouragingly while the GMB, Britain's General Union, called the situation one of stalemate and animosity.
Having elected Dr Caroline Lucas as the UK's first Green Party MP in 2010, Brighton and Hove City Council is also Green by slight majority. Their mandate focuses on sustainable environmental policies and fair trade and business initiatives. Caroline Lucas was until very recently also the leader of the national Green Party; she stepped down from that role to concentrate on her parliamentary duties and local issues. To date, she hasn't made a comment about the refuse crisis.
Today, B and H Council and the GMB have issued a joint statement, announcing that the industrial action will be "temporarily" suspended while new proposals from the council are considered. It's claimed that the proposed changes to services will be beneficial to residents as well, although of course the residents haven't been consulted with or even told what these changes will be. The council website does however point out that it's against the law for council tax payers to withhold any part of their bill due to the disruption of service, health hazard or inconvenience.
Brighton's increased number of rough sleepers have obviously been affected badly by the dispute. Some have taken to clearing rubbish themselves and trying to limit the carnage from the gulls. It's been both moving and disturbing to see this. Like most residents, I love Brighton warts and all, but open rubbish tips on main roads and along the seafront were avoidable and are not acceptable. Due to recent experience, most of us have no faith that the backlog will be cleared quickly or easily. The suspension of industrial action is temporary; there's no mention of contingency plans if the 28 day consultation fails.
Oh and instead of warning residents that we could face legal action if we pull back an effective refund for loss of services, perhaps an open and honest apology and explanation were in order. A guarantee that next year's council tax charge will reflect this sorry situation wouldn't go amiss.
Just sayin'. 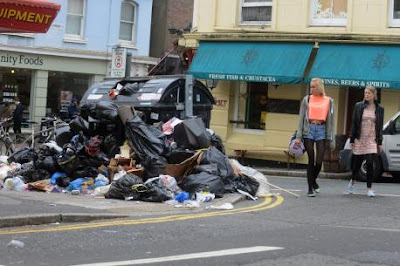 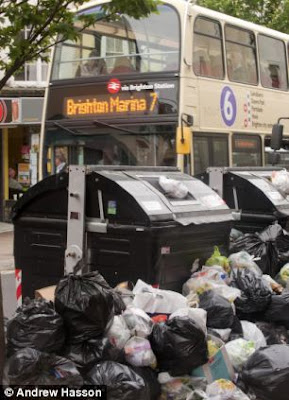 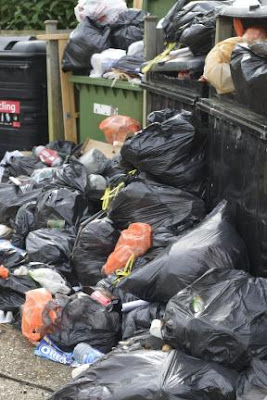 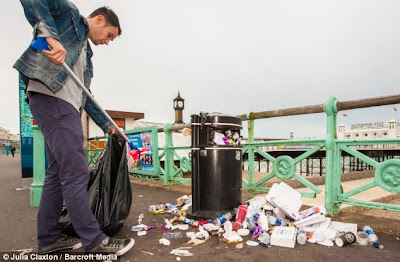