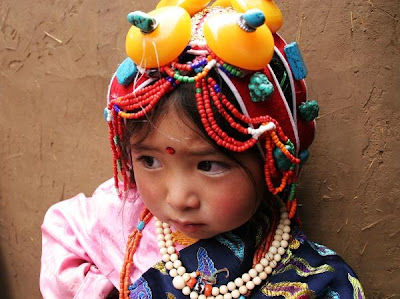 This New Year's Eve in the UK, whilst watching Jools Holland's Hootenanny, many of us may have raised a glass in the face of recession, social division and the widespread hardship of the past year. Today, 22 February, is the start of " Losar", the Tibetan New year: 2012 is the Year of the Water Dragon. Traditionally, festivities would commence on the eve of the new year, with a religious based and monk-led ceremony called " Dai Gui", The Beating of the Ghosts. Any evil spirits or bad memories from the past year are literally beaten out and scared away with large masks and loud horns. This colourful and noisy tradition originated from Tibetan Buddhist monks cleansing their monasteries of ill will. For generations, many Tibetans have also kept the custom of fetching fresh water from rivers and streams before dawn on the New Year's Day: pre-dawn water is believed to purify the soul to enable continuing good fortune. Celebrations for China's 5 million Tibetans would normally last until the 15th day of the first month of the new year. It's a time of hope and renewal, atonement and rebirth.
Last year, many Tibetans were unable to celebrate according to tradition due to the biting cold and makeshift shelters following 2010's earthquake. Today, many people affected by the quake have been re-housed in new Tibetan-style structures, built with subsidies from the Chinese government. Some Tibetans might well admit that their living standards have improved in recent months and that they never dreamed of living in such housing, although in these areas a Chinese national flag will never be far from sight.

This year, emigre Tibetans have been urged by their exiled prime minister, Lobsang Sangay, not to "celebrate" the new year: only to follow spiritual rituals and to shun exuberant festivities. They have been asked instead to fast, to pray in monasteries, to make offerings and light butter lamps for all those inside Tibet who have suffered repression under the Chinese government for the past 50 years; and for all those who continue to suffer. News from inside Tibet is certainly restricted and can be sobering when it surfaces. Sangay reports that Tibet is practically sealed off, with virtually no "foreigners" allowed access: even Chinese tourists are not allowed to cross into Tibet. The military build-up is heavy and visible. The exiled minister has never actually been allowed to visit his ancestral home. 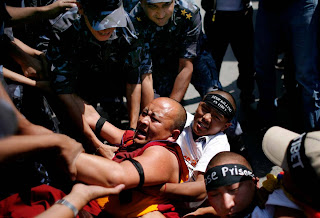 The Tibetan government-in-exile is refuged in India, along with some 100,000 Tibetans, and the 14th Dalai Lama, the highest Buddhist priest of Tibet. The Central Tibetan Administration has issued several updates on the situation within Tibet, always calling for the liberation of Tibet and the return of the Dalai Lama to his homeland. The CTA has now reported that more than 20 people have set themselves on fire in Tibet since this time last year, in protest against China's ongoing policies. Most of these "self-immolations" have been Buddhist monks in the Tibetan parts of the Sichuan and Gansu provinces, next to what China has named the Tibetan Autonomous Region. In the first two weeks of February, two teenaged monks have set themselves alight in separate incidents. China's state news agency, Xinhua, has also confirmed that a Buddhist nun set herself on fire last week; she is believed to have survived the flames.
The Chinese government has branded those who set themselves alight terrorists. In contrast, the exiled Tibetan spiritual leader, the Dalai Lama, has called the self-immolations "cultural genocide" by the Chinese; he has not called for them to stop. 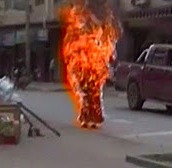 Reuters have confirmed that this year's Losar celebrations have been quiet and without incident so far. However, heavy security in many areas and the obvious widespread Tibetan resentment for the Chinese government's presence make for an unpredictable and volatile combination. The warmer weather is coming, along with sensitive anniversaries such as National Uprising Day on 10 March, recalling the 1959 Tibetan uprising. Again, the exiled prime minister has called for commemorations to take place "peacefully, legally and with dignity."
In the weeks leading up to the New Year holiday, it's been reported that China has deployed army and paramilitary officers across Tibetan areas. Some sources claim regions have been hermetically sealed off by the authorities, and that many Tibetan towns now resemble armed camps. It's been known for some time that important pilgrimages have been limited by army checkpoints. Now, it's reported that one of the most revered pilgrimage sites, Potala Palace, has been claimed as a military post. The palace, in Tibetan capital Lhasa, was once home to hundreds of monks; there may be less than 40 still in residence. The World Heritage site is now thought to house soldiers and other militia personnel.
Since the systemisation of the Tibetan calendar in 1027, the flowering of the cherry blossom in February has been synonymous with the new year. It should be a time of peace and welcoming. Tibetans would traditionally throw open their doors at daybreak and be ready to welcome friends and family from near and far, as well as travelling strangers. This year the cherry blossom flowered too early for the planned new year, as though it it was no longer respectful of it's own legend. 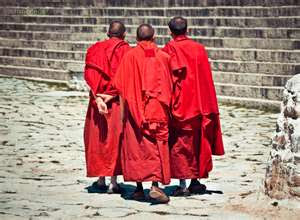