"The Star Spangled Banner"  sung by Whitney Houston
"Didn't we almost have it all
When love was all we had worth giving?
The ride with you was worth the fall my friend
Loving you makes life worth living"
(From "Didn't We Almost Have It All", written by Michael Masser and Will Jennings; artist, Whitney Houston)
Whitney Houston was born in East Orange, New Jersey in 1963, daughter of acclaimed Gospel singer Cissy Houston. Church was a feature of her community and music was a huge part of her childhood: her cousin was Dionne Warwick and she grew up around vocalists such as Aretha Franklin, Gladys Knight, and Roberta Flack. It was inevitable that she would first sing publicly in church. At the age of eight, she performed "Guide Me, O Thou Great Jehovah" for a mesmerised congregation at the New Hope Baptist Church in Newark. Decades later, she would tell Rolling Stone magazine: "When I used to watch my mother sing, which was usually in church, that feeling, that soul, that thing - it's like electricity rolling through you. If you have ever been in a Baptist church or a Pentecostal church, when the Holy Spirit starts to roll and people start to really feel what they're doing, it's incredible."
Obviously, Whiney Houston's days of singing to friends and family in a New Jersey church were numbered. By the age of 12, she was singing backup on recordings for major recording stars like Chaka Khan and Lou Rawls. Stunningly sleek and beautiful and with an undeniable God-given talent, Whitney Houston was a chart topping artist in her own right by the time she entered her twenties. Hit followed soaring hit and the ethereally pretty girl became a diva. Her first acting role was as the star of the 1992 feature film "The Bodyguard", in which she played a diva - and very well. The film's original soundtrack won the 1994 Grammy; its lead single "I Will Always Love You" became the biggest selling single by a female artist in music history.
She became the first act (solo or group, male or female) to sell over a million copies of an album within a single week. She was the top female act featuring in the Top Ten Best Selling Albums of All Time. Although a subsequent film vehicle "The Preacher's Wife" wasn't a massive cinematic success, the soundtrack album became the best-selling Gospel album in history. We said she was born to be a star: she was a success and a phenomenon. Middle-class America forgot that she was black. She sang "The Star Spangled Banner", inimitably, and Americans united in their adoration for her and her path to fame that cut through and across social and political divides.

On February 11, 2012, Houston was found in the bathroom of her suite at the Beverly Hilton Hotel, Los Angeles: she was certainly deeply unconscious and could not be resuscitated. She was in town for the Grammy Awards, partied and feted as a legendary artist with an unrivalled tally herself. Staying at the hotel with her 18 year old daughter, Whitney had been photgraphed earlier that day, dishevelled and bloated and clearly the worse for some substance or another. Her daughter (by bad-boy husband Bobby Brown) Bobbi Kristina was admitted to the Cedars-Sinai hospital twice in the 24 hours after her mother had been pronounced dead there. The teenager had also been drinking heavily and may have taken prescription or other drugs: she was in the hotel suite when her mother was found in the bath, unaware of the situation and "surrounded" by prescription medication, including sedatives Valium and Lorazepum, Michael Jackson's last addiction. Bobbi Kristina was treated for extreme anxiety and the Houston family and entourage are said to be concerned for her mental state.
In New Jersey, the owner of the Whigham Funeral Home has announced a private, by-invitation only funeral service at noon this Saturday. The requiem mass will be at Newark's New Hope Baptist Church, where Whitney's voice and radiance were first showcased. The poignancy is palpable: Whitney is going home, in so many ways. There have been many sentimentalised reports, allegedly from "sources close to" Whitney, saying that she had only recently re-connected with her religion after several highly publicised years of crack-cocaine addiction, alcoholism, mortification at the hands of her womanising and volatile husband. Her weight had plummeted between emaciation and bloating; she may have been on the verge of bankruptcy when she died. Certainly her last singing performance, at "Tru" in Hollywood and shortly ahead of the Grammys, was of "Jesus Loves Me", but it's a far cry from the inspirational soaring emotion of the young Gospel singer; it's actually painful to watch and to hear. 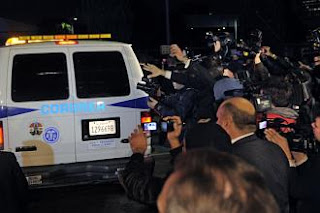 This is a rough catalogue of events spanning the 40 odd years for the eight year old prodigy in the New Hope Baptist Church who will be returning there on Saturday as a star, but in a coffin. As with so many hugely gifted, globally famous people, so much went right for her; but when things went wrong, they were catastrophic and ultimately tragic. I'm not totally dismissive of Fame. I've been known to watch "X Factor": I grew up watching "Top of the Pops". I've queued for hours to sing myself hoarse to Bruce Springsteen (still The Boss you understand). I'm thrilled for Adele at the Grammy Awards this year, with her newly honey-blonded big hair and her good ol' North London gasps of appreciation: thrilled and slightly concerned for her. I love to listen to her voice and lyrics, and she seems like a nice, ordinary girl. I buy into the whole persona like so many others; but one hopes and prays that the perceived grounded "ordinariness" is real and durable.
I've heard several people say that Whitney would still be alive if she hadn't walked away from Gospel. Sadly, we can never know that now. But for sure, the Gospel never walked away from Whitney. The wonderful gift she was given now becomes her legacy. Another generation will marvel at her rendition of "The Star Spangled Banner". Little black girls with big lungs in recession ripped America will sing into their hairbrushes and realise they can Have It All. There will be more raw talent, more accolades, more awards, more glitzy parties, more induced highs, more pitifully early and avoidable deaths in over-priced hotel rooms.
The Show Goes On.
"I Love The Lord"  Whitney Houston (from "The Preacher's Wife", 1996 )
﻿
Posted by Gigi at 9:58:00 pm