When I first moved to Brighton, my mother was upset by the reported comments of one Reverend Archie Coates, an Evangelical priest from London. He dubbed Brighton " the most Godless city in Britain", citing the problems of unemployment and homelessness, vagrancy and substance abuse. Personally, I've found the city to be far from Godless; it seems to me to be a place of faith, hope and charity. In fact, a record number of new Catholics have been received into the Arundel & Brighton Roman Catholic Diocese over recent years. In 2009, the diocese saw an increase of over 50% in the number of men and women received into the Catholic church. I obviously disagree with Reverend Coates; I think that financial difficulty and social hardship can make people revaluate what's really important.

My mother was more encouraged by news coverage in the summer of 2010, concerning a nun from Brighton who was being fast tracked to sainthood. Mother Riccarda Beauchamp Hambrough was born in the town in 1887. Her parents converted to the Catholic faith when she was four, and she was then baptised in the Roman Catholic church of St Mary Magdalen in Upper North Street. As a young girl, she attended mass and prayed there and her vocation was inspired. At the age of 24, she travelled to Rome to join a convent.
Mother Riccarda eventually joined a revived order of Bridgettine sisters in Rome, nicknamed “the hot cross bun nuns” because of the distinctive crosses covering the tops of their wimples. During World War II, this unassuming nun made her mark as a bold and committed woman. In 1943, the Nazis took control of Rome and began transporting their tragic human cargo out to Auschwitz. Mother Riccarda and the Abess of the order, the now Blessed Mary Elizabeth Hasselblad, smuggled scores of Italian Jews, Communists and Poles into their convent at Casa di Santa Brigida and hid them there. Many jews later testified to Mother Riccarda's particular kindness: she was known to them simply as "Mama".
Mother Riccarda became head of her order and later died in her beloved Rome in 1966. Her cause for sainthood was opened in July 2010 by the Diocese of Rome. Significantly, her file was quickly referred to the Holy See's Congregation of Causes for Sainthood. Last month, it was reported that the Pope is considering the case for Mother Riccarda to be declared "Venerable". The quest will then begin for two miracles in order to declare her "Blessed". The conclusive step will be sainthood. Her progress is being followed avidly at St Mary Magdalen's; Catholic Brightonians already feel she is the "local saint".
In a typically quirky Brighton move, the city's bus company has now named a bus after Mother Riccarda: a number 7 to be exact, travelling from Seven Dials to the railway station and on to Brighton Marina. Since 1999, every new bus entering the Brighton and Hove fleet has been named after a person notable for their significant contribution or strong connection to the area. It's undeniably charming and quite a talking point. Most of the names have an obvious relevance: the Prince Regent, Maria Fitzherbert, Martha Gunn, Thomas Paine, Kitty O'Shea. Max Miller, of course, has an open-top sightseeing bus named after him. Other choices seem to have more tenuous links: Chopin, really? There was even a bus inexplicably named after Santa Claus; sadly now out of service. 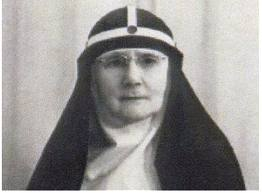 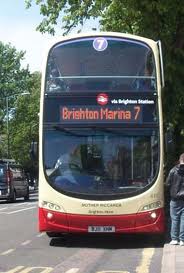 Apparently, the very nice Father Blake from St Mary Magdalen's has been asked to bless Mother Riccarda's number 7; he'll probably end up blessing the entire fleet, which can only be a good thing. The Catholic church is watching for signs of acts of Divine Intervention to speed Mother Riccarda to sainthood. I've seen many strange and wonderful things on the number 7 route since I moved here; not sure I would use the term "divine"...
Posted by Gigi at 12:07:00 pm