The Lady in Red is wearing well at 150

For a collective of villages that calls itself a city but is really a town, Brighton and Hove boasts 11 Catholic churches. Some of them are prettier than others, some are more impressive than others. St Mary Magdalen's Catholic church, situated in what used to be called the Montpelier area, is both, as well as being a Grade II listed building, although it's restoration is ongoing. This year, the church is also 150 years old. Built by the ecclesiastical architect Gilbert Blount, contemporary of Isambard Kingdom Brunel, the church stands on Upper North street, which connects Brighton with "upmarket" Hove. Until 1861, Brighton had only one Roman Catholic church; St John the Baptist in Kemptown, built in the 1830s and also very impressive. 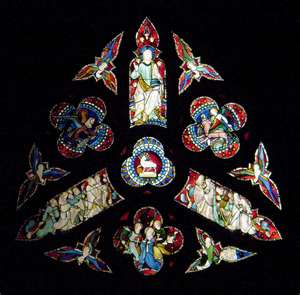 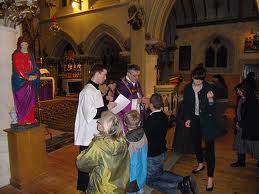 St Mary Magdalen's was commissioned when a "mission district" of West Brighton was established in 1860. The sanctuary was completed in 1861, with the naive added a year later. The red brick church has an elegant spire and gorgeous stained glass windows. There are several beautiful statues of "favourite" saints, including St Mary Magdalen herself, a poignant figure in a scarlet robe. There are 3 masses on Sundays, including a sung mass and one in Polish, in recognition of the cultural mix of the area. There is currently a Latin mass every Friday.
The parish of St Mary Magdalen was already in a mood of anticipation, following the progress of Mother Riccarda Beauchamp Hambrough. The Brighton nun was baptised at the church and is now on the road to sainthood, in recognition of the bravery she demonstrated offering sanctuary to Jews and others during World War II. (More of Mother Riccarda's story can be found in an earlier post). Now, the second oldest church in Brighton is celebrating it's 150th anniversary with a fine programme of events organised by the redoubtable parish priest, Father Ray Blake. He's the author of an eponymously named and recommended Catholic blog and is reassuringly vocal about many, many things. He's chosen to open the 150th anniversary celebrations with a Traditional High Mass to commemorate the first mass, held when the naive was opened. He points out that the naive was built to accommodate not only the growing number of Catholics in Brighton, but also to draw in and encourage non-Catholics. In 1862, Father Ray's predecessors employed an orchestra and professional singers to perform the Hayden Imperial Mass with the intention of creating a spectacle of Catholic worship. He points out that "They simply wanted people to come, to take pleasure in what was happening, to be moved, to find others were praying around them and experiencing (our first) High Mass as a profound spiritual but also cultural and sensual experience".
His programme of events kick-starts an evangelisation initiative. Father Ray has emphasised that his passion throughout the celebrations is to welcome people back to the church or into the church for the first time; initially engaging the senses through the music and ritual of High Mass. The parish has been asked to invite non-Catholic friends and in particular younger people along to the anniversary mass: the Traditional Mass is intended to be "approached on many different levels by different types of people". 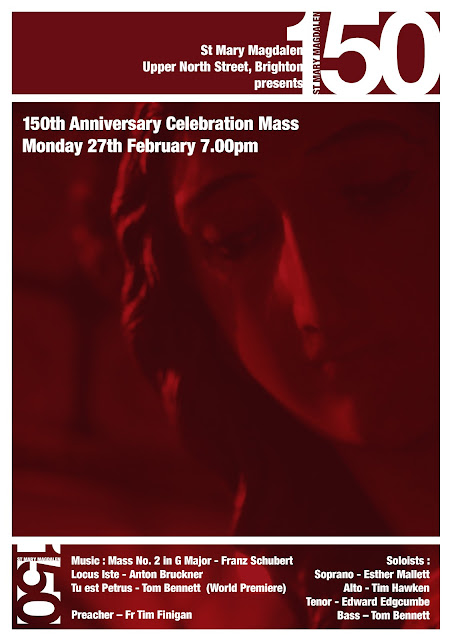 The mass, on Monday 27th February at 7.3opm, should be pretty rousing all round. The preacher will be Father Tim Finigan, Catholic commentator and author of the blog "The Hermeneutic of Continuity". St Mary Magdalen's church has it's own renowned choir; they will be boosted by local semi-professionals as well as young Oxford based professionals.
On Sunday 4th March around midday, Father Ray will be blessing the number 7 bus which Brighton and Hove's bus company has named after Mother Riccarda - wonderfully, only in Brighton!
On Friday 9th March at 7.30pm, internally acclaimed classical composer Dr James MacMillan introduces a series of talks with the “The Future of Music, Modernity and the Sacred; a composers perspective”. His Catholicism has inspired much of his work. Lectures by notable speakers continue in May and June, focusing on the future and direction of the Catholic church. Sadly for me, I won't be in Brighton for Monday's mass or the blessing of Mother Riccarda's bus due to family commitments around my own birthday: I'm not actually 150 years old although it feels quite like it... I do hope to attend some of the other events and the programme is still being added to: Monsignor Keith Newton of the Ordinariate has agreed to come and speak about "The Future of Ecumenism". Apparently, there has been talk of a street party and even a blessing of the sea! This may sound ambitious for an aged red brick church, but this is Brighton, and St Mary Magdalen's. If you're in Brighton on Monday, or on any of the other dates, you'll be very welcome. 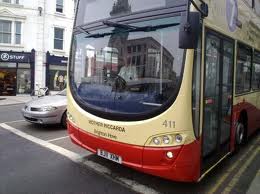