Birds and beads, trees and tries 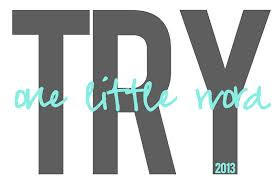 "Try to be better than yourself."
(William Faulkner) 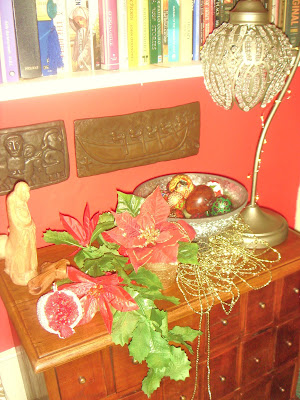 Whenever I take down Christmas decorations, it usually makes me feel a little deflated, as though I'm packing away cheeriness. My decorations are largely lights and garlands, and beads, berries and birds on my pot plants. I don't care for tinsel, and my own Christmas tree is a living, growing, potted one that I've nurtured and nagged for more than ten years. Everywhere that I've moved, Noel the Tree has moved too. He started his life with me in South London; a tiny, ornamental but non-specified fir from Sainsbury's. He was stuck in a red plastic flowerpot, with fake snow on his branches. Just the right size for Mum's mantelpiece, he was supposed to be thrown away by Twelfth Night, but I have a problem throwing away anything that's still even vaguely green and vibrant. When I realised he was actually rooted and growing, I decided to encourage him to be a tree.
Re-potted several times since then and now more than six feet tall, he guards my back door. He has his own set of solar star-lights which he wears all year round, but he also has his own silver star and poinsettia garlands for Christmas. He did look rather camp at Christmas; he seems to be flourishing in Brighton's misty dampness. He's withstood being diagnosed as disposably ornamental, some mis-management from my Mum, and being hacked about by my brother-in-law who thought he was an unpruned and misguided shrub in Mum's front garden. During moves from London and then across Brighton, he's been locked in storage, knocked down basement steps and ridiculed and disrespected by various removal men. I'm an admirer of trees generally for their strength and dependable longevity; I'm extremely fond of Noel the Tree.
It didn't really take long to dismantle festivities in my little house this year. Traditionally, I try to give the last piece of the last mince pie to the birds in the back garden - feathered ones, not some bedraggled hen-party who've stumbled off the main road straight into my rose bushes, confused by Noel's twinkling. The other day, I watched for at least ten minutes while a very small robin tried valiantly to fly off with the largest piece of pastry. Luckily, Ginger the tom from next door was purring obliviously at the bottom of my stairs.
I've never really seen a robin in a tizzy before. Every time he started to fly away with the pastry, he would drop some and start flapping and spluttering. What appeared to be a fat thrush popped down to muscle in; the robin saw him off in no uncertain terms. Eventually, he got a larger piece up to the safety of my garden table, where he pecked and gulped it down, all the while keeping a bright eye on the rest of his hoard. He then hopped down and secured another large-ish morsel, then another. Eventually, he finished all of it on his own and did a little twitchy victory-dance around the garden table; I felt like applauding him. 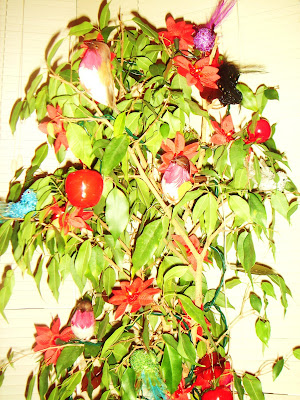 I've already told friends that I haven't really made resolutions this year. However, after writing about Brighton's phoenix-like spirit and reflecting on my own hardy Christmas tree,  grown-up from a supermarket novelty, I've encountered probably the toughest little robin this side of Hastings. On New Year's Day, I watched the skaters on the ice-rink in front of the Pavilion. As soon as the ice was cleared between sessions, a motley crew swished and staggered out. There was a lot of wobbling and clomping, quite a bit of teetering and rail-clinging; surprisingly little falling. From six to sixty year olds, there was a palpable sense of "trying". There are some rather pompous looking plastic "practice penguins" with grip handles for the very young or very wary, but they were largely left redundant. There was a lot of smiling: it made me feel that it really is exhilarating to have a go and then just great when success surprises you.
One little girl of about seven stumbled out on her own and skidded straight into the barrier while her dad struggled to attach his skates. She looked terrified, with her feet splaying in opposite directions, but she'd circumnavigated the rink by the time her father had reached the ice, clinging to the rail the whole time. As she crashed against the barrier near me, I gave her an encouraging grin. She managed a wry little smile back as she lurched past the practice penguins disdainfully. 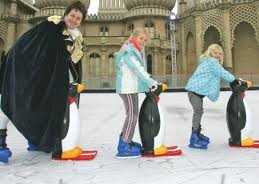 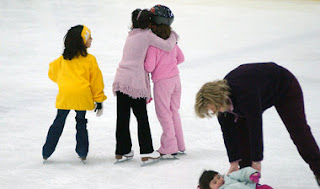 My schoolfriend Bernie used to send out letters and cards of encouragement including the motto:"Dream, Believe, Try, Achieve". Having lived her own advice, she's achieved many things since leaving the convent, including writing several books about whatever has fired her enthusiasm, and founding the influential "Women's Environmental Network". The Green MP for Brighton, Caroline Lucas, is one of their "matrons": the WEN doesn't have "patrons". I've actively appreciated the first half of Bernie's motto: I do believe in the power of dreams and goals, and I do have faith which enables me to be strong for people and things I care about. I even have a niggling awareness of my capabilities. But I then stop short of actually trying sometimes.
As the frost set in towards the end of 2012, I wrote it off as one of several years with more moans than merriment, more losses than treasures. Last night, after spotting that one ceramic berry I hadn't taken off the ficus plant, I realised it's simply been a trying year; and therefore literally one full of opportunities for trying. Groucho Marx famously said that he wanted to live for ever and would die trying to; Judy Garland once declared that she definitely did believe in the power of a rainbow and had spent her whole life "trying to get over it". Somewhere between these two sentiments, there is a little patch of wintry ground where hopes, like little robins, shy away from calling themselves resolutions, just in case some quirky blonde is watching from the window.
My godfather, "uncle Bob", was a bit of a trier  although he was often written off by folk as a dreamer. He was a former docker and merchant seaman from a working class family in a run-down part of Southwark, south London. He hadn't had the best education in the world, certainly with no time or funds for formal musical or literary instruction. Yet at his packed funeral in Rotherhithe some years ago, doubting friends were amazed to hear that he really had become a river pilot on his beloved Thames and indeed a Master Mariner; he actually had joined the Black Watch guards and learnt to play bagpipes; he did eventually have one or two of his many country compositions recorded in Nashville.
A fellow lover of Robbie Burns, uncle Bob would recite huge chunks of his poetry; "Auld Lang Sine" was his favourite. He also particularly liked T.H. Palmer's "Try, Try", but I only realised why it was special to him after he died:

"'Tis a lesson you should heed,
If at first you don't succeed,
Try, try again.
Then your courage should appear,
For if you will persevere,
You will conquer, never fear;
Try, try again."
When he suffered a heart attack at the age of seventy, it seemed inconceivable that he might not pull through: he was a battler, after all. My mother and I were stunned when his body seemed to give out on his spirit and he died of organ failure. My godfather's seemingly mundane and humble life had actually been an unpublicised Curriculum Vitae of persistence and quiet triumph.
I've always appreciated that a score in rugby is fittingly called a try, rather than a goal. Anyone who's ever played will testify to the deliberate and concentrated effort behind every try. Sorry to sound disparaging to any footie fan, but I've never heard of an accidental score in rugby ; it's not really possible to score an "own-try". So, my one resolution is actually just to try, about whatever and whenever I feel passionate to do so, but hopefully not just for the new year. Because hope is for life, not just for Christmas.


*For my friend Mel Bauwens, another tough little robin who achieved so much last year; and for Bobby Allen, RIP* 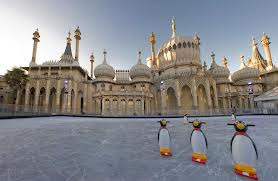 "You can't always get what you want,
But if you try sometimes
You might just find
You get what you need."
(The Rolling Stones)

"Courage doesn't always roar.Sometimes it's the quiet voice at the end of the day, saying 'I will try again tomorrow'."
(Mary Anne Radmacher)

"Life is not measured by the number of breaths we take, but by the moments that take our breath away."
(Maya Angelou)