"Do you want to go to the seaside?
I'm not trying to say that everybody wants to go.
I fell in love at the seaside;
I handled my charm with time and slight of hand"
(From "Seaside" by The Kooks)

Photo: Gigi, album
Several years ago, when I was still a born and bred Londoner, The Independent published a short article about Brighton, coining it the latest destination for Londoners in "the demographics of disillusionment". Brighton has often been dismissed as "London-on-sea": to be fair, many of the folk I've encountered here in the past couple of years have escaped from The Smoke, only to find this gritty little corner of East Sussex has some of the most polluted air in the UK.
The article rattled on about Brighton's tarnished and tired reputation and the underbelly of wide-boy entrepreneurs and gold chain wearing gangsters. Yes, Brighton can be seedy, but I've found it's an almost cosy kind of seediness, a bit like our beautiful heron gulls strewing pizza and party poppers along the pavements. The article berated Brighton's people as the real problem, citing middle-aged punks, hippies and ravers and in particular the "lentil-munchers" who believe they're special. I appreciate that many people beyond East Sussex certainly feel that a lot of Brighton folk are somehow trying to evade or cheat their way out of maturity. I prefer to view our little quirks and eccentricities as a kind of die-hard innocence. Even our lopsided and crammed little terraced streets (now marketed as charming workmen's cottages but originally Victorian slums) are painted in clashing pastel shades, in defiance of whatever is thrown at the area, meteorologically, socially or economically.
I often say that Brighton is a rusty little place to live: there's something precious glinting beneath every layer of barnacles and grime. I've seen real poverty among people since I moved here, sometimes spiritual as well as physical; yet I've also witnessed both the gentleness and the tenacity of the human spirit. It is gritty here, but let's call it true grit. The ancient settlement Brighthelmstone dates from before the Doomsday Book. The Brighton of the Regency Set and recent day-tripping has literally raised itself up from the ashes. Brighthelmstone was sacked and burnt to the ground by French raiders in 1514, leaving only part of St Nicholas' Church (the area's Mother Church) and the skeletal street pattern of The Lanes. By the 1740s, Brighton had reinvented itself as a spa and resort. I've no doubt Brighton will emerge from the current recession and any era of disillusionment with that spirit and sense of irony intact.
The Independent concluded that Brighton was "the capital for people who can't handle London", with nearby Lewes the choice for those who can't handle Brighton. It conceded that Brighton could be extremely useful: "as a dump for London's moaners". Again, I agree that many of us who are self-exiled Londoners have a bag of chips on our shoulders about constant comparisons between the two cities. "It's actually very different from London " we say earnestly,  " for one thing, we have the sea..." And the one thing about Brighton that will never be urbanised or easily dismissed is that it is unequivocally, unapologetically and un-subtly Seaside, with everything that implies. It has the green gentility of the Downs to ease back against, the Little London shot of hustle and bustle to keep it on it's patched up toes, but it is essentially a fishing village that made good and remains on the lookout and on the make to do so again. Even our beautifully gaudy and slightly incongruous royal palace, The Pavilion was once just a re-hashed farmhouse with a sea view. 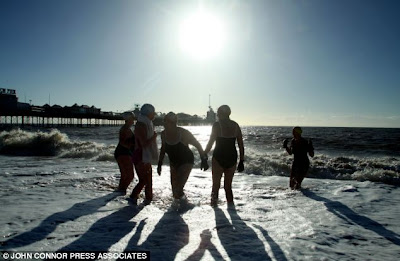 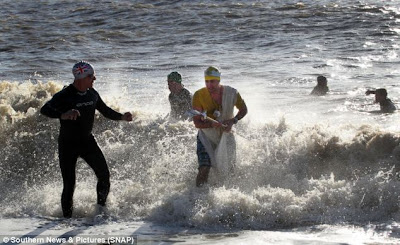 Traditionally, every Christmas Day since 1860 and more recently each New Year's Day, hardy Brightonians take to the sea for an obviously very chilly and apparently rejuvenating dip. This year, they were disappointed after the council closed the beach because of bad weather. With the usual high tide and burgeoning winds being taunted by the forecast of an unusually heavy sea swell it was considered too dangerous, even for experienced swimmers. The early morning temperature also fell below five degrees. Yet yesterday morning, the New Year dippers were back in force, at the pier beach and further along the stony Brighton coast.
It was a quiet day in the city, although the pier was still lit up and winking from Christmas; like a favourite auntie after a few festive sherries, all dressed up in the hope the family are taking her out. With many restaurants closing at 6 pm, there seemed to be quite a few people wandering around hopefully, looking for somewhere to be and something to do. I ambled home last night from a lovely day out and about, with the reassuring feeling that it could only be a matter of time before they find them. 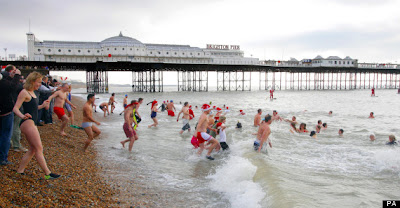 "It's a good world if you don't weaken."
(From "Brighton Rock", Graham Greene)