Another Tail from Eden...

"How you behave toward cats here below will determine your status in heaven".
(Robert A. Heinlein)

Many thanks to John Richardson in Australia for sending this joke, which I've had to adapt slightly for this blog!
I love cats; much as I have an affinity for and fascination with snakes and reptiles, I have all the standard weaknesses for cute and fluffy. Purely on an aesthetic level, I think cats are the most beautiful of creatures; from glorious lions and tigers through to the neighbourhood moggies. My own little cat Sooty was with me for nearly all of her 14 years of life: it's a measure of how much I miss her that, some eight years after her death, I haven't managed to "replace" her, even though I keenly feel the absence of a cat in a single person's life. I feel if you have the devotion of a cat. you must be doing something right! My Sooty Poshpaws was born around the end of August and the black and white cat at the foot of this joke bears a strong resemblance to her.
I've joined in many discussions with Catholic animal-lovers about whether or not animals go to heaven: obviously, all creatures of the earth and sky were accommodated on the ark... Personally, I feel that animals who become part of our lives are entrusted to us by God. I'll remember that next time my neighbour's handsome but wayward ginger tom, cunningly called "Ginger", sticks his whole face in my morning porridge...

Adam and Eve said:“Lord, when we were in the garden, you walked with us every day. Now we do not see you anymore. We are lonely here and it's hard for us to remember how much you love us.”
And God said:“I will create a companion for you who will be a reflection of my love for you, so that you will love me even when you cannot see me. Regardless of how selfish or unlovable you may be, this new companion will accept you as you are and will love you as I do, in spite of yourselves.”
And God created a new animal to be a companion for Adam and Eve.
And it was a good animal and God was pleased. And the new animal was pleased to be with Adam and Eve and wagged his tail.
And Adam said:“Lord, I have already named all the animals in the Kingdom and I cannot think of a name for this new animal.”
And God said:“I have created this animal to be a reflection of my love for you; his name will be a reflection of my own name and you will call him Dog."

And Dog lived with Adam and Eve and loved them. And they were comforted.
And God was pleased.
And Dog was content and wagged his tail.
After a while, it came to pass that Adam and Eve became filled with pride. They strutted like peacocks and believed they were worthy of adoration. Dog had indeed taught them that they were loved, but perhaps too well.
And God said:“I will create a companion who will see them as they are. This companion will remind them of their limitations so they will know they are not always worthy of adoration.”
And God created Cat to be a companion to Adam and Eve.
And Cat would not obey them. And when Adam and Eve gazed into Cat's eyes, they were reminded that they were not the supreme beings. 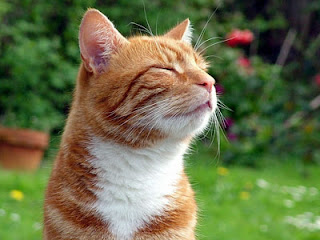 And so, Adam and Eve learned humility.
And they were greatly improved.
And God was pleased.
And Dog was happy and wagged his tail. 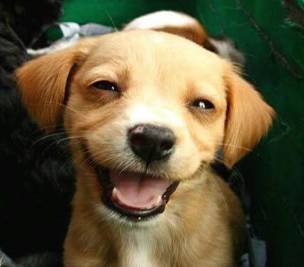