There's something about Mary: The Feast of The Assumption 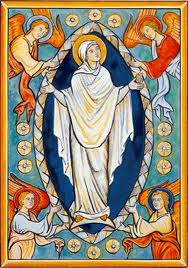 "Who Is She Ascends So High?"
(from the Roman Catholic Breviary)
Who is she ascends so high,
Next the heav'nly King,
Round about whom angels fly,
And her praises sing?
Who is she adorned with light;
Makes the sun her robe?
At whose feet the queen of night
Lays her changing globe?
This is she in whose pure womb
Heaven's Prince remained;
Wherefore in no earthly tomb
Could she be contained.
Heav'n she was, which held that fire,
Whence the world took light,
And to heav'n doth now as pire:
Flames with flames unite.
She that did so clearly shine,
Our day once begun,
See how bright her beams decline,
Sitting with the Sun. As a convent schoolgirl, I grew up with a fascination for the traditional Catholic devotion to Mary, the Virgin Mother of God. As a "Child of Mary", I joined with other bustling little girls to decorate the chapel with flowers during the month of May, all of us proudly wearing our blue sashes. I still have my little rosary from my First Communion; the cheapest, mass-produced plastic, but sugar-pink and precious. Family holidays to my Dad's homeland would always incorporate a trip to Our Lady's shrine at Banneux: I can still picture the rows of souvenir Blessed Virgins; a regiment of serenity with celestial blue cloaks and rose-cheeked inclined heads. These days, I belong to the Catholic Women's League, where each meeting starts with The Rosary. I now have a frieze of The Black Madonna in my living room: I managed to paint the alcoves there almost the exact same shade as her vivid red cloak; I only wish I had found my blue sash before the family home had to be sold...
Why do we so love Mary?
Yesterday, 15th August, was the feast of The Assumption, celebrated across the Christian churches; a Holy Day of Obligation and also a public holiday in Austria, Belgium, France, Greece, Italy, Malta, Spain and many other countries. The word "assumption" is literally from the Latin for "taken up": we celebrate that Mary was assumed into heaven, body and soul. Many Catholics do believe that Mary died physically before she ascended to heaven, but this aspect of The Assumption is not fully defined in the theology of the Catholic Church. It's a beautiful and joyous feast: Mary's Assumption is seen as a divine gift to her as the mother of Jesus; but also serves as a reminder of the saving grace that awaits us all.
Christian "Mariology" (the study and theology of Mary), explores not only her life but also the veneration of her in our own daily lives. The Virgin Mary has been a divine muse for artists, musicians, composers of hymns, sculptors and architects throughout ancient and modern Christianity. Non-Catholics have often accused the Roman Church of "loving Mary too much": deifying her in fact. However, now that I'm no longer the awestruck child with an armful of unruly roses, I appreciate that most Catholics feel a strong personal relationship to Mary because of her essential humanity; she is effectively, mother to all. As a woman, I also feel that Mary is Eve redeemed; femininity and loveliness without treachery, artifice or blemish.
We feel that Mary is our intercessor, "Our Lady": when something seems too trivial to place directly before God, Mary is there to support us through our trials and irritations and small but poignant hurts. Just as a child might run to a mother for comfort with a grazed knee, we feel Mary is accessible in this way. The emphasis is actually on her being fully human rather than any notion of deity. She is a figure of warm hope, sympathy and compassion.
Mary's selflessness and compassion as a human being are seen as ultimate. She acceded to God's wishes; a bewildered and guileless young girl, at a time when being an unmarried mother could have catastrophic consequences. Later, this very real mother would willingly sacrifice her child for the fulfilment of the scriptures and, therefore, our own. In a very practical sense, Mary supports the role of women in what is all too often viewed as a patriarchal "firm". Although Mary obeyed the word of God without question, I've never thought of her as subservient. She may be a vessel without sin, but she is far from empty: "full of grace", she is the embodiment of God's love at work in us, she gives birth to Christianity and Catholicism. Far from dismissing her as a meek, blindly following virgin, I rather believe she was only too aware of the enormity of what was before her and what would come after. Her selflessness actually required courage and resolve: this combined with her immense tenderness makes her uniquely powerful and important within our faith.
The Catholic priest, Trappist monk and poet Thomas Merton wrote many devotional Marian poems, although he felt that her greatest glory was her "nothingness": I love that he compares her freedom from all egotism to the purest glass of the cleanest window, but I've always felt that Mary the woman and mother had a great deal of substance to her! I believe that our devotion to Our Lady is flamed by her innate preciousness, which she carried with utter humility: this is what makes her complete. Sadly, I don't have a daughter: if I did, I would be thrilled to see her set aside her magazines of teetering, collagen-tampered WAGS and wannabes to don a blue sash for a real Lady. 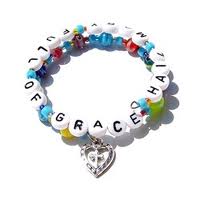 "Mare Mia"  Diana Navarro
"Because my will is as simple as a window
And knows no pride of original birth,
It is my life to die, like glass, by light:
Slain in the strong rays of the bridegroom sun."
("The Blessed Virgin Mary Compared to a Window"  Thomas Merton) 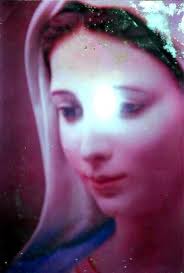