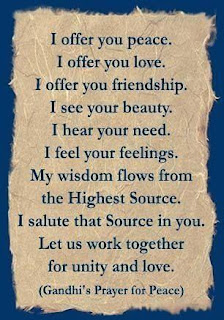 "Three things will last forever--faith, hope, and love--and the greatest of these is love."
(1 Corinthians 13:13)
I'm indebted to Chantal for reminding me of the simple energy of Gandhi's Prayer for Peace. Chantal wouldn't mind me saying that she may not be a fan of organised religion but she is an ardent supporter of the power of Spirit, of souls and of angels at work amongst us. Whilst I'm happy to call myself Catholic, I feel fortunate that life has introduced me to good people who are Anglican, C of E, Buddhist, Jewish, Muslim... One of my Brightonian friends, actually a lapsed Roman Catholic, describes himself as a "paranormal physicist wizard"; as comedian Dara O'Briain would say, he might just be seen as a particularly bad Catholic! Echoing another good ol' Oirish comedian, Dave Allen used to say he was "...an atheist, thank God": I have friends who define themselves as "agnostic", but they're loving, hopeful agnostics. Therefore, I cheerfully believe they actually have faith that the proof they feel they need exists. I believe that where there is Love, there will be Hope; where there is Hope there must be Faith.
Remember the old saying that as long as you get to the destination it doesn't matter who's driving the bus? I'm always heartened to see people return or commit to the Catholic Church, but I would also rather live in a city where I can see a spectrum of faiths at work daily, rather than stark disbelief or spiritual atrophy. For me it's simple: if you have faith in the universe, you have faith in God, if you have faith in your fellow man or yourself, you have faith in God. If you have faith in God, by whatever name, we're on Common Ground; fertile, supportive and open to all.
Mahatma Gandhi stated that he believed in the truths of all the great world religions: "All the religions of the world, while they may differ in other respects, unitedly proclaim that nothing lives in this world but Truth". As a committed opponent to the convenience of "communalism", basing political standpoints or initiatives on religious tenets, he was able to reach out to diverse religious groups and gain the audience of the politicians. The name bestowed on him by his supporters, Mahatma, literally means "Great Soul". Gandhi often said he disliked the name: his simplicity was his strength and resolve. Sometimes, labels are merely like washing instructions or a list of ingredients or components: they speak nothing of struggle, joy or worth. Simplicity of purpose and as acceptance can be much maligned in today's world; instead of  bemoaning insufficient complexity as though it were embroidery, bask in the clarity and purity. We're all the same in that we're all different: beyond this, further division is obsolete. If I wander into your church to light a candle and you don't  recognise me, don't dwell on where I might be from or even where I'm going. Let's just share the warmth of the flame.
"Simple Soul"  Eddi Reader

"Out of clutter, find simplicity. From discord, find harmony: in the middle of difficulty lies opportunity".
(Albert Einstein)
Posted by Gigi at 9:58:00 pm