Could you Adam & Eve it?

"So hand in hand they passed, the loveliest pair that ever since in love's embraces met -- Adam, the goodliest man of men since born his sons; the fairest of her daughters Eve."
("Paradise Lost"  John Milton) 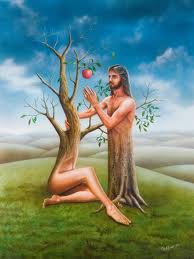 Thank you to John Richardson from Australia for the following facts about the amazing human body, with the additional "Adam&Eve-it" from Tilly!
It takes your food seven seconds to get from your mouth to your stomach.
One human hair can support 6.6 pounds.
The average man's penis is two times the length of his thumb.
Human thighbones are stronger than concrete.
A woman's heart beats faster than a man's.
There are about one trillion bacteria on each of your feet.
Women blink twice as often as men.
The average person's skin weighs twice as much as the brain.
Your body uses three hundred muscles to balance itself when you are standing still.
If saliva cannot dissolve something, you cannot taste it.
Women will be finished reading this by now.
Men are still busy checking their thumbs.

"Because God took one look at Adam and said, 'Wow. This guy's gonna need all the help he can get.' And here we are."
(Nancy Mehl)


"Ever since Eve started it all by offering Adam the apple, woman's punishment has been to supply a man with food then suffer the consequences when it disagrees with him."
(Helen Rowland) 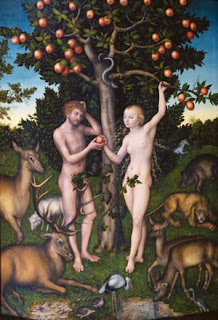 "If Adam and Eve were not hunter-gatherers, then they were certainly gatherers. But, then, consumer desire, or self-embitterment, or the 'itch,' as Schopenhauer called it, appeared in the shape of the serpent. This capitalistic monster awakens in Adam and Eve the possibility that things could be better. Instantly, they are cast out of the garden and condemned to a life of toil, drudgery, and pain. Wants supplanted needs, and things have been going downhill ever since. "
("The Freedom Manifesto"  Tom Hodgkinson)
Posted by Gigi at 10:20:00 am