An enterprise of stillness

"Prayer and love are learned in the hour when prayer becomes impossible and the heart has turned to stone."
(Thomas Merton) 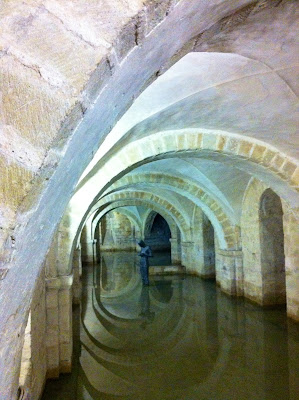 Some places really do seemed steeped in spirituality. Winchester Cathedral is a wonderfully historic place, in the heart of the city that was once England's capital. The cathedral stands on a site that has housed places of worship or religious learning for more than 1300 years, with a treasure trove of artefacts spanning eleven centuries. The cathedral's library contains the 12th century Winchester Bible and mythology and mysticism rub shoulders along the choir stalls, carved with flora, owls and monkeys, knights and dragons and Green Men.

In the crypt of Winchester Cathedral usually knee high in water, there resides a best loved piece of sculpture. "Sound II", by Catholic sculptor Antony Gormley, is a solitary figure standing in the middle of the crypt, apparently contemplating the water held in his cupped hands. I love Antony Gormley's figures, which include "The Angel of the North" at Gateshead and "Another Place" along the Merseyside shore, not only for their thought provoking situations but because of their typical mix of stoicism and soulfulness.Whenever I've managed to get to Winchester to see this statue, I seem to have come away with Paul Simon's words from "I Am A Rock" weaving through my head:
"I have my books and my poetry to protect me: I am shielded in my armour;
Hiding in my room, safe within my womb; I touch no one and no one touches me."
The figure seems to be entombed, but does it signify a self-imposed isolation?

Life-sized and fashioned from lead, the statue was created specifically with the regular flooding of the crypt in mind; during the rainier months, the water below the main body of the cathedral is usually two or three feet deep. Beautifully apt when you consider that the legendary archbishop and patron saint of Winchester, St Swithin of the forty day deluges, is encased and venerated in the church "upstairs". I'm fascinated that the water-bound figure is made from lead: elementary lead is very water-resilient and doesn't dissolve or react under normal conditions. However,  when lead does react within water, the water becomes toxic to the human body. I've often wondered if the figure is descending into the water or emerging from it. Now, I don't feel the necessity to define it either way: I feel the figure is an enterprise of stillness. It could be a figure of recollection, reason, or hope; it could be all three as the embodiment of Faith.
In a perfect blending of faith, art and technology, "Sound II" has been designed so that as the collected rainwater level rises to knee level, it pushes up and along an internal tube into the figure's chest and then pours out into the cupped hands. How many statements does this silent witness make? We should treasure our emotions but not choke on them. We should reflect on our sadness or failure without wallowing in it. The human body is nearly three quarters water. Water is critical to human proliferation and forms an essential part of our metabolism. We know that our world is up to seventy percent covered by water. In it's purity water should be odourless, tasteless, colourless; transparent as truth itself. Yet water is far from simply an innocuous and translucent life-support system. Living by the sea, I'm still amazed that the calming undulation of the water can swell and crash so suddenly. The most placid lake can take life in an instant. The power of water sustains and threatens, just like man; rather like religion.
When I've visited Winchester Cathedral before, I've found the crypt figure to be quite melancholic; this week, on what Simon and Garfunkel really would call "a winter's day, in a deep and dark December", I found it reassuring. It made me smile. I wanted my sister and brother-in-law to appreciate the beauty of "Sound II": my brother-in-law is an avowed atheist, yet he seemed moved by both the setting and the sculpture. He agreed that the figure could be praying or meditating, or simply reflecting. He could even be cleansing himself in oblivious solitude; I was once told by a monk that the figure could be John the Baptist, quietly ever-ready and waiting beneath the ritual, ceremony and visual celebration of the Church.
After some wrangling, I found that my brother-in-law could accept that, whatever his view of organised religions created and interpreted by men, faith itself is a naturally occurring force. I miss two friends in particular from my time working in social services in London; Dale, who would also call himself an atheist or even an anti-theist, and devoutly Muslim Rakib, who is raising his two babies according to his parents' very orthodox faith. I miss the heated discussions across the desks between those two, sometimes culminating in one or all of us laughing at something so profoundly insulting that it could only be hysterically puerile between friends. The fact that we could then get back on the council's phones or have a tea-break together is for me a singular demonstration of faith; whether it be Dale's faith in rationality and the human condition, Rakib's faith in the righteousness of his forefathers or my own all-singing, all-hugging and often wittering take on Christianity. It was (and is) friendship founded in the colour and humour of differences, rather than the starkness of division.
Both my friend Dale and my brother-in-law would stress that devotion to any religion is a sign of weakness, a need to affiliate and be absorbed into something "big" for definition and protection. My own Irish Catholic background has shown me that the clannish tradition in most organised religions can easily lend itself to bigotry and sectarianism. The current violence in Belfast seems to centre on the hoisting and defiling of flags, team colours almost, rather than any theological argument or historical injustice. But I still feel that faith can be hugely resilient and empowering. It's hard to cut kindness or courage into little pieces, even with the sharpest sword. A word of mercy resonates longer and louder than the most potent explosion. You can't burn anyone's faith away at any stake: the ashes of whatever you sought to destroy are carried like hope on the breeze, to be scattered further than you could ever foresee.
I've always felt that the Simon and Garfunkel song was a study in melancholic irony: no-one is an island, made of rock. You can dig your own well by hand to irrigate your particular patch of desert, but someone else will already have invented the bucket. And you will dig in faith that the water is there. 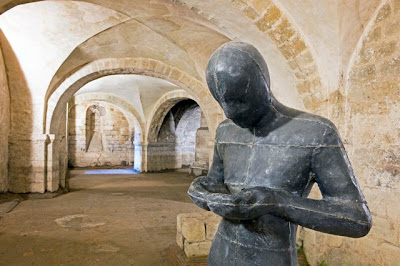 " I Am A Rock"  Simon and Garfunkel

"No Man Is An Island"
(John Donne)
No man is an island,
Entire of itself.
Each is a piece of the continent,
A part of the main.
If a clod be washed away by the sea,
Europe is the less,
As well as if a promontory were;
As well as if a manor of thine own
Or of thine friend's were.
Each man's death diminishes me,
For I am involved in mankind.
Therefore, send not to know
For whom the bell tolls,
It tolls for thee.

"What I wear is pants. What I do is live. How I pray is breathe."
(Thomas Merton)