...as though no-one is watching 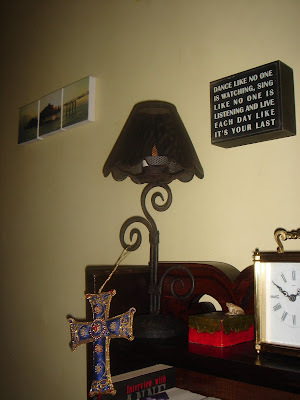 Visitors to my fally-down house in Brighton are greeted by an assortment of eccentricities, even as they proceed down my little hallway. Among these is a small woodcut that serves as a mission statement from the householder. It's an adaptation of a much-loved verse: often accredited to Mark Twain, one of my favourite authors, it's also been credited to Father Alfred de Souza and William W. Purkey. 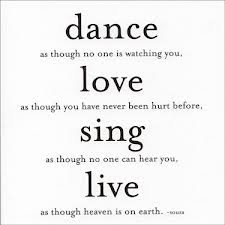 A couple of days ago, my friend Coral's angelic but totally precocious four year old daughter Ronnie was pirouetting around in an empty room, only pausing to curtsey to her unseen public. She didn't miss a beat when I asked her why she was dancing: "Because Nobody's watching, Gigi!"
When I was slightly older than Ronnie, I would frequently embarrass my parents by singing all the way along the aisles in Safeway supermarket - for some reason, "Puppet on a String" was a huge favourite - and by shouting "Ding ding! All 'board!" at every stop on the old number 94 buses through Lewisham. Nowadays of course, I wouldn't dream of bursting into a Eurovision classic in the middle of Aldis: but is that really progress?
I'm often told that various aspects of me, from my voice to my clothes to my sense of humour, are childlike and therefore un-befitting someone of my actual years. Until quite recently, I used to be insulted, but now I understand it as something rather precious. I love Mark Twain's verse because it perfectly sums up how I hoped to live my life: not in selfish hedonism or at the expense of others, but with a lack of vanity and an essential feeling of joy and optimism. After another year of whingeing about myself and most people around me, I realise I've fallen far short of that goal again. We generally tend to disregard others' opinions until we question how they're regarding us. I've promised Ronnie that I'll go dancing with her out on The Level park when the weather is warmer, something she'll hold me to with the fluffy tenacity of a four year old. My other resolution for the New Year should surely be to pay more attention to the writings on my own wall.
Lee Ann Womack's song "I Hope You Dance" is a country favourite of mine and a regular number to warble in the shower, only witnessed by Ginger the-cat-from-next-door and God. Apart from that, Nobody. Why does Ginger the cat insist on sitting at my bathroom door when I have a shower? Well, he's a Brighton cat. Maybe he's read Mark Twain.


"I hope you Dance"  Lee Ann Womack (ft. her daughters)


"I hope you never lose your sense of wonder,
You get your fill to eat but always keep that hunger;
May you never take one single breath for granted,
God forbid love ever leave you empty handed.
I hope you still feel small when you stand beside the ocean;
Whenever one door closes I hope one more opens.
Promise me that you'll give faith a fighting chance
And when you get the choice to sit it out or dance,
I hope you dance"