Maiden born and made 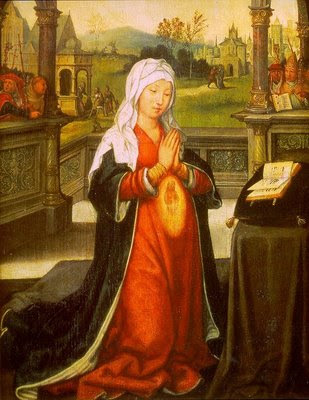 "All that was mixed and reconciled in Thee
Of mother's love with maiden purity"
(from "The Virgin", William Wordsworth)


On 8th December, Christians respect the Solemnity of The Immaculate Conception; one misconception non-Christians may have of this feast day is that it's the celebration of the virgin conception of Christ. The feast is actually a recognition that Mary the Mother of God was born to St Anne in a state of grace, conceived and preserved from original sin: William Wordsworth beautifully depicted Mary as: "Our tainted nature's solitary boast".
While there is no suggestion in scripture that Mary was conceived in anything other than the usual manner, Anne herself is generally described as being childless until her later years: indeed she is Jesus' grandmother. Somewhat overlooked in Christian mythology, Anne, (from the Hebrew "Hannah", meaning "grace"), is also revered in Islam and mentioned in the Qu'ran as Mary's mother and a highly spiritual woman. Islamic legend holds that she prayed for a son after watching a bird nurturing her young. Against all odds, she conceived, bearing a daughter who would be blessed among women; and who would bear and nurture the Son of Man.
The patron saint of housewives and unmarried women: I like St Anne! (She's also the patron saint of grandmothers and women in labour; and, rather more randomly, of cabinet makers and miners...) 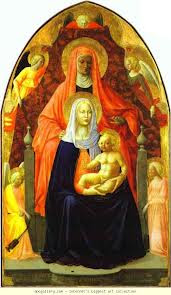 "The Immaculate Conception"
A dew-drop of the darkness born,
Wherein no shadow lies;
The blossom of a barren thorn,
Whereof no petal dies;
A rainbow beauty passion-free,
Wherewith was veiled divinity.
(John Banister Tabb) 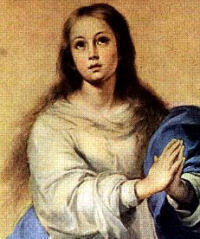 "The Holly and the Ivy"  Annie Lennox